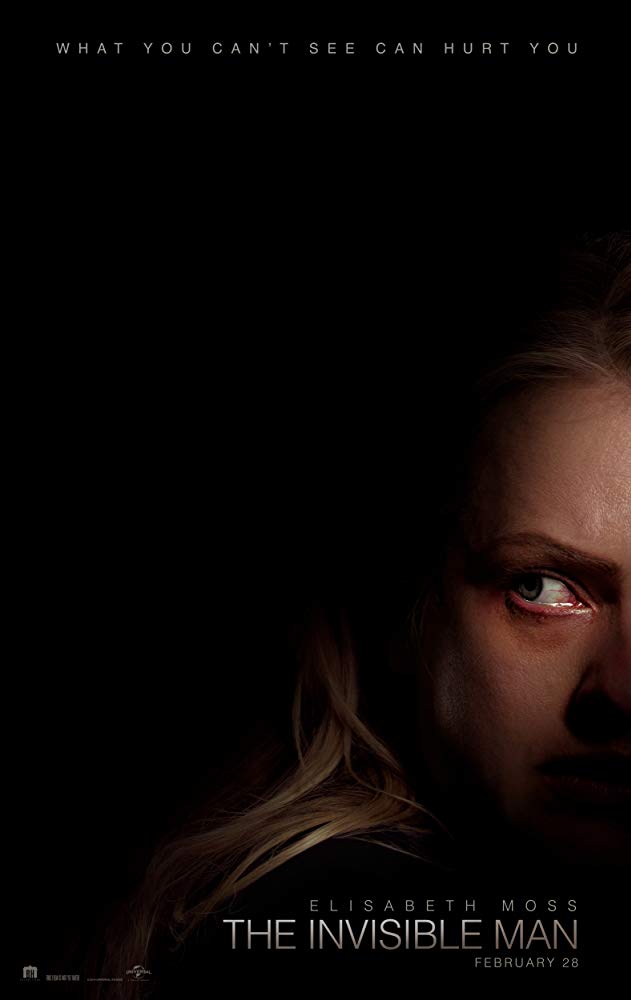 The Universal Monsters are quintessential horror icons with staying power, even though some of them are close to 100 years old; their book counterparts are even older than that. The Invisible Man, to take one, was based on the H.G. Wells 1897 novel and initially adapted in 1933 by Frankenstein director James Whale. In the last 87 years, there have been sequels, spinoffs, an Abbott & Costello film, and even the Paul Verhoven film Hollow Man starring Kevin Bacon. Now comes The Invisible Man, which modernizes and flips the story around, placing Elisabeth Moss in the visible lead.

Cecilia Kass (Elisabeth Moss; Her Smell) escapes from Adrian Griffin (Oliver Jackson-Cohen), her abusive and manipulative partner of nearly 3 years, with help from her sister Emily (Harriet Dyer) and childhood friend turned cop James (Aldis Hodge; What Men Want) and daughter Sydney (Storm Reid; A Wrinkle in Time). However, Adrian dies by suicide two weeks later and leaves Cecilia his $5 million fortune by way of his lawyer brother Tom (Michael Dorman) with the condition she doesn’t commit any crimes. But as the days pass, Cecilia’s paranoia grows and she’s convinced that Adrian, a cutting edge optics scientist and inventor, is still alive and invisibly torturing her. Is she losing it or has Adrian really found a way to turn himself invisible?

What this take on The Invisible Man does incredibly well is grounding the film in the world of an abuse survivor. Moss embodies this role well, with wide-eyed paranoia from the first scene through the end of the film. Benjamin Wallfisch’s foreboding (and sometimes overpowering) strings-keys-and-synth-heavy score helps up the tension and paranoia. In addition to paranoia, there’s the ever-present doubt – which, given Cecilia’s history with Adrian, there should be none of. If a woman says she’s been abused and that her thought-dead abuser scientist is tormenting her, you believe her.

All of this helps center the film around the theme of control or lack thereof, which was also evident in writer-director Leigh Whannell’s previous tech horror film Upgrade (thanks in part to returning DP Stefan Duscio’s controlled camera pivots during fight scenes). Given Whannell’s start in the genre writing the more psychological thriller/horror Saw films and the more supernatural horror Insidious films, I find this pivot towards tech-driven horror interesting. Perhaps it’s a sign of the times, or maybe it’s the direction the genre is going.

But there’s the elephant in the room: Universal’s Monsters. This is in no way connected to the deep-sixed Dark Universe franchise. The Mummy did it in with the ostentatious opening logo; it was the first and last nail in the franchise’s coffin, even though Dracula Untold was the first film. The decision to step back and focus on stand-alone films that aren’t as reliant on the supernatural was a wise one. As for where the Universal films go from here, it’s anyone’s guess, as all upcoming films (Paul Feig’s Dark Army, Dexter Fletcher’s Renfield, Frankenstein, and Elizabeth Banks’ The Invisible Woman) are TBA and still in the early development stages.

The Invisible Man is a February surprise that eschews some of the genre tropes, along with its predecessor (also leaving fan service pretty much at the door, except for Adrian’s last name). The control and paranoia themes revitalize the Wells novel and the focus on an abuse survivor helps modernize and reorient the story. Plus, if you need a non-news or disease scare, The Invisible Man is a good 2-hour respite.