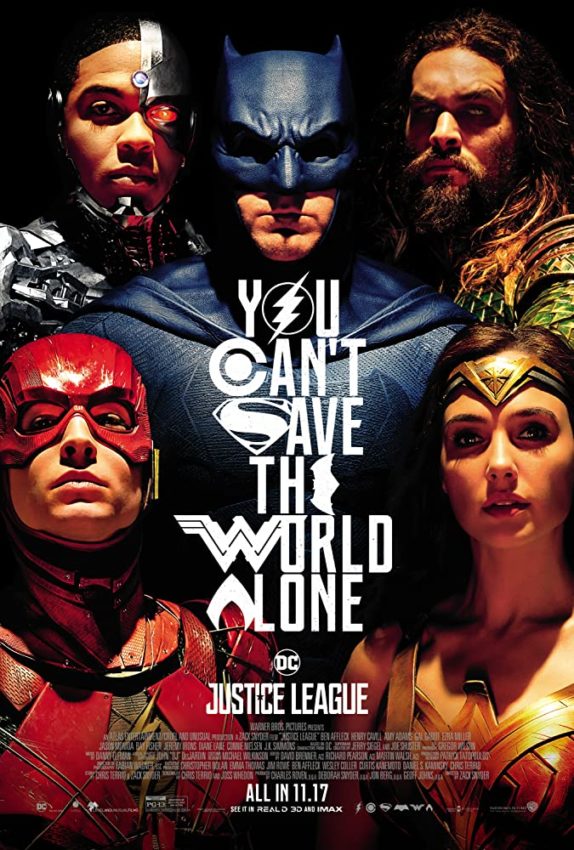 In the four years between the release of Iron Man and the release of The Avengers, Marvel fans were treated to origin stories for Hulk (a re-origin, that is), Captain America, and Thor, and the first Iron Man sequel. Not to be left out, DC and WB hopped into the superhero franchise game, but had their work cut out for them in terms of launching and catching up.

In the four years between the release of Man of Steel (which both Will & I reviewed – mostly favorable at the time) and the titular DCEU team-up (I’m talking Justice League, not Batman v Superman), DC fans were treated to the Zack Snyder-heralded Batman v Superman, Suicide Squad, and Wonder Woman. To say that both franchises (in their first respective phase, anyway) don’t measure up is an understatement. But first, let’s get to the elephant in the room.

DC fans have been waiting years for a proper live-action Justice League film, and while their more recent TV and direct-to-DVD counterparts have handled similar team-ups well (focusing on the 1990s onward and excluding the backdoor TV movie pilot that went nowhere), Justice League handles it … fine. Let’s go with fine as an adequate descriptor for now. 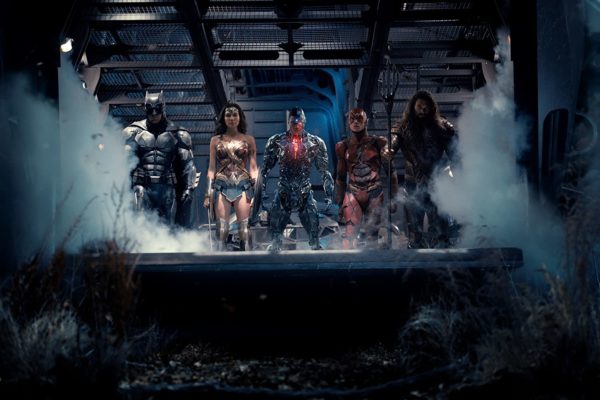 In the aftermath of Batman v Superman, Bruce Wayne/Batman (Ben Affleck) and Diana Prince/Wonder Woman (Gal Gadot) have been crimefighting in Gotham and London, respectively. However, Bruce has realized that there are fear-seeking extraterrestrial humanoid-bug soldiers (later identified as Parademons but recognizable to fans of the comics and animated adaptations) loose in the greater Metropolis-Gotham area, so he takes it upon himself (with some help from Diana) to recruit the people with special abilities that Lex Luthor (Jesse Eisenberg) was tracking for his team of super-friends (an avoided term in the movie, thankfully, unless I missed a mention): Arthur Curry/Aquaman (Jason Momoa) protects an Icelandic village and its fishing population, Barry Allen/Flash (Ezra Miller) tries to solve his dead mom’s murder which was pinned on his jailed dad Henry (Billy Crudup), and mostly cybernetic shut-in Victor Stone/Cyborg (Ray Fisher) is holed up in his family apartment despite his head-of-STAR-Labs-scientist father Silas (Joe Morton) insisting he go outside. Meanwhile, the Parademon army commander Steppenwolf (Ciaran Hinds) arrives on Earth by Boomtube (interplanetary teleportation – from the comics) to claim three sizeable boxes known as Mother Boxes from Themyscira, Atlantis, and STAR Labs. When combined, the Mother Boxes have the power to remake worlds in the image of his homeworld Apokolips, which is his end goal.

There you have it. The fate of the world is at stake and it’s up to the motley crew of quipping superpowered (minus the tech-obsessed billionaire) individuals to stop an invading alien conquering force. There’s no aid from any Green Lanterns (although there’s a brief ring appearance), additional Atlanteans, or Amazons (whose outfits are less practical and battle-ready than in Wonder Woman – a large point of contention online this week). And there may or may not be a resurrection involved (but if you’ve read up on anything in the film – credits included – you know who’s back). Wait, this sounds like that other superhero team-up movie from 5 years ago that shares a common creator (writer-director, modern pop culture icon, and accused philanderer Joss Whedon). Whedon was brought on in late 2016 for reshoot rewrites and took over from Snyder in May 2017 for post-production and additional reshoots.

The plot itself is straightforward once things get moving and the League comes together, but it takes a good chunk of the first hour to do so – at the expense of passing Bruce Wayne and Alfred (Jeremy Irons) quips, a brief historical flashback, and unnecessary will-they-won’t-they banter between Bruce and Diana. Well, maybe not totally straightforward, as there’s a resurrection and ensuing fight sequence that takes up 15 to 20 minutes of the early portion of the second hour that slows things down and detracts from the end-of-the-world plot. 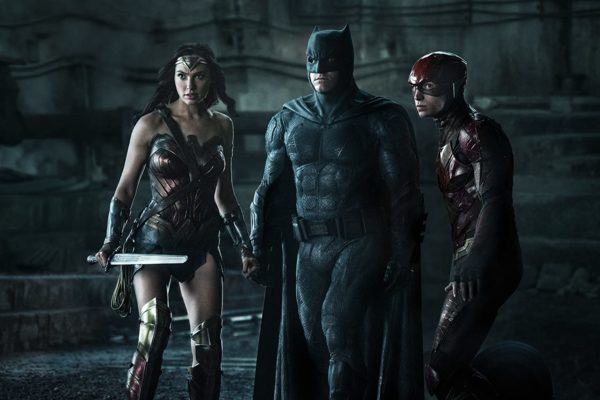 As for the characters, everyone fits into their slightly lighter roles – the lightest being Barry, who fits into the socially awkward comic relief mold. Cyborg is still coming to terms with his accident and transformation, which results in a mix of brooding and technical wizardry. Aquaman, the reluctant heir to the Atlantean throne, is only convinced to join after Atlantis is attacked, and is macho/boastful throughout. Batman is a little lighter in tone (less grim-dark Batman is always good), but still pushes the team to take a big risk and has a tense colleague relationship with Diana, leading to the banter and back-and-forth over leadership. Steppenwolf is as flat as they come. His lone motivation is simply to conquer Earth and make way for his nephew Darkseid … but why is a mystery.

Speaking of CGI and reshoots, things aren’t as bad as Doomsday in Batman v Superman, but they come close. Steppenwolf looks like he stepped out of a video game cutscene and is maybe a marginal improvement from Doomsday, but he’s on par with the final towering appearance of Ares from Wonder Woman. As for the mostly CG appearance of Cyborg, it’s more skeletal and bulky than fans of the character would expect and isn’t always convincing (but there’s a hint of the familiar suit in the film’s epilogue, thankfully). In terms of fight scenes, the line is poorly blurred between slo-mo actors/stunt-people and CG, and the editing of the aboveground and underwater fight scenes doesn’t help. However, Flash’s Speedforce sequences make this aspect a little more tolerable. … And that’s not even touching on the “controversy” surrounding a certain actor’s CG upper lip, which looked passable on the big screen, but I couldn’t stop trying to see where the mustache coverup started and ended.

From a musical standpoint, familiarity breeds a sense of comfort. After Hans Zimmer retired from scoring superhero movies and his protege Tom Holkenborg (a.k.a. Junkie XL, or the guy who scored Mad Max: Fury Road and Deadpool) stepped in for a year, only to be replaced by frequent Tim Burton collaborator Danny Elfman. And as can be expected from 1) Danny Elfman, and 2) a superhero team-up movie, there are frequent recurring heroic cues, but nothing seems to stand out as the key League leitmotif, outside of the brief opening logos cue. Elfman’s 1989 Batman theme pops back up, as do tinges of Hans Zimmer & Junkie XL’s Wonder Woman cue and a certain John Williams cue. Otherwise, Cyborg’s cues sound a touch brooding, Flash is lighter and flute-driven, and Aquaman’s have an aquatic flow and a choral feel – apart from a few “Icky Thump”-underscored moments. As for the rest of the soundtrack, it’s split between Sigrid’s stripped-down cover of Leonard Cohen’s “Everybody Knows” and Gary Clark Jr and Junkie XL’s hard-driving cover of The Beatles’ “Come Together” – likely selected because of the apropos title; both are on very different ends of the musical spectrum but don’t quite balance out. Overall, this sense of comfort helps lighten a not-quite-as-grim superhero movie.

In the current pantheon of DC’s Extended Universe, I’d place Justice League below Wonder Woman but above Man of Steel, Batman v Superman, and Suicide Squad in that order. It’s mildly entertaining, has good hero moments scattered throughout, and sets the stage for future solo (Aquaman is now in post-production, J.K. Simmons appears in a glorified cameo as Commissioner Gordon to spin off into a possible Batman solo film, and the other heroes have their own spin-offs in the works) and team-up ventures (both from the eventual threat of Darkseid and the villainous team-up alluded to in the 2nd post-credit scene). However, it’s not without its pacing, character, and plot flaws (not to mention the lighter grim-dark veneer), which weigh down the resulting film.