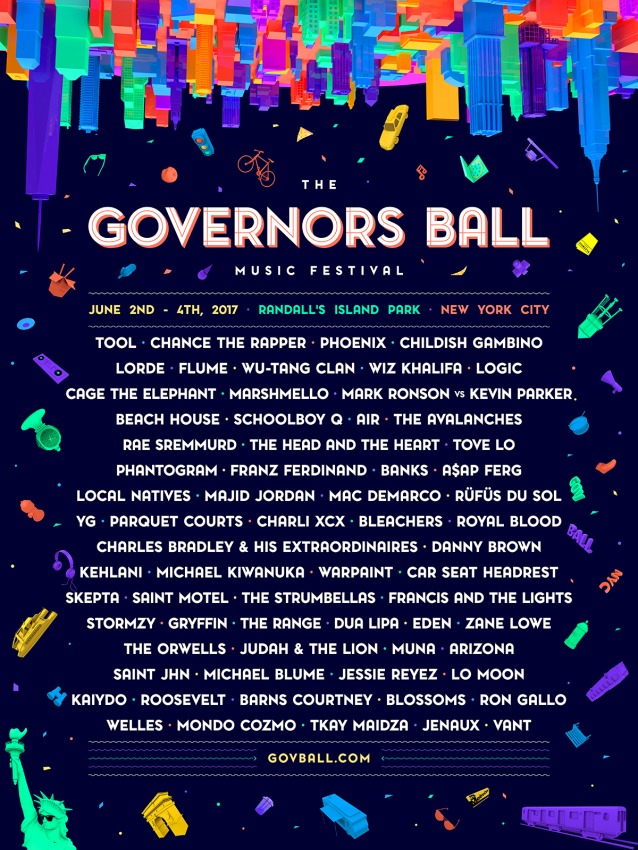 We may be only a few days into the new year but that means it’s time for all the music festivals to reveal their 2017 lineups. Here in New York there’s quite a few festivals starting to emerge, but there’s only one that we have relied on year in and year out: Governors Ball.

They’ve announced this year’s edition of the festival (at Randall’s Island as usual), and it’s as varied and eclectic of a mix as ever. Headlining the festival is Tool, Chance The Rapper, Phoenix, and Childish Gambino. Then you got Lorde, Flume, Wu-Tang Clan, Wiz Khalifa, Logic, Cafe The Elephant, and Mark Ronson vs Kevin Parker. From there, highlights include Beach House, Schoolboy Q, Air, The Avalanches, Franz Ferdinand, Phantogram, The Head and the Heart, Banks, Local Natives, Mac DeMarco, Parquet Courts, Royal Blood, Charles Bradley & His Extraordinaires, Danny Brown, Michael Kiwanuka, Warpaint, Car Seat Headrest, The Range, The Orwells, Ron Gallo, and even former BBC radio host Zane Lowe.

We’ve been covering Governors Ball every year since the second edition, and are excited to hopefully return this year to see what new memories this years edition of the festival brings. Tickets for the festival go on sale this Friday at noon, with early bird pricing starting at $275.

See you at Randall’s Island this summer!