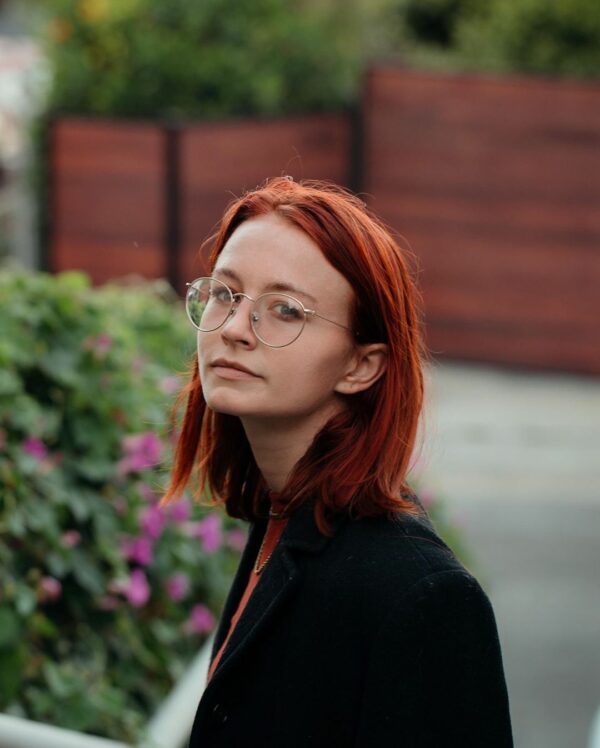 Today she releases her brand new EP On Self Loathing which features five songs that give you hope for the future of pop music.

We had the pleasure of chatting with McCall online about the new release, what it’s like to be an artist “on the rise”, what it was like to play clubs in Atlanta underage, and so much more.

Find our full discussion below, which has been edited and condensed for clarity.

Will: First off, how have you been with everything going on? You’re in Los Angeles right now, right? How are things out there?

McCall: I’m actually in Atlanta spending the month with my mom right now! We usually see each other a few times a year, but because of the pandemic, I haven’t seen her since Christmas of last year, so I’m happy to be home. I had to quarantine for 10 days at a hotel when I got here, though, before I could get tested – Zack and Cody make it look a lot more fun. I’m moving to Minnesota to work on the next project in a little bit, and then I’ll meander my way back to Los Angeles once things are open again and less on fire. But for now – the woods!

W: You are about to release your new EP, On Self Loathing. When I’ve been doing interviews this year, it’s been interesting to hear the different perspectives on releasing new music right now. Can you tell us how it feels to be releasing new music during this strange time?

M: I’m lucky I get to do it! It definitely feels strange and selfish to be self-promoting while there is so much chaos happening. But as a high school and college drop-out who has never done anything besides write songs…I feel like the best thing for me to do is continue to work so I can donate what I can, volunteer my time when I can, and educate myself in as many ways as I can throughout this process. Everyone needs to have something to hold onto during these Unprecedented Times, and for me, that’s my music.

W: Your songs have a lot of colorful electronic production and an upbeat nature but they tackle some heavy topics. Which goes against a lot of the preconceived notion of pop music. How do you find a balance between the two and is it a therapeutic process?

M: It is definitely very therapeutic!! Writing this EP alongside actual therapy has been completely life-changing for me, and I’m excited for the future projects to be more playful and upbeat now that I’m out of my dark night of the soul, haha. I have ADHD, so I need a lot of stimulation to keep me interested in songs, especially my own songs that I hear a million times over. Bobby Rethwish produced the EP, and his ability to blend a plethora of ear-candy throughout the most emotional chordal synths blows me away everytime.

W: It’s quite fascinating that you spent your teenage years in Atlanta using a fake ID to play shows. Where most kids had ID’s to drink at clubs, you were trying to do something productive. Can you talk about that experience and how it helped you on your journey?

M: To be honest, there just aren’t a lot of performance opportunities for teenagers in Georgia, so the only way I could get paid to play music was by convincing dive bars to let me play covers for three hours a night in the corner. It thickened my skin pretty quickly. No one cares less about the 16-year-old singer/songwriter in the corner than a room of middle-aged, southern men trying to watch their football game, haha. I was also homeschooled during my senior year of high school and didn’t have many friends, so it was something to do besides sitting at home. No shade to the kids that went to the clubs though, I definitely did my fair share of partying in various basements in my early high school days.

W: These days you’re based in Los Angeles and left USC to pursue music full time. How has LA helped shape your journey as an artist? Can you also talk about the decision to leave college to pursue your dream, as that’s something a lot of people want to do but never actually do?

M: There’s no doubt that being in a city like Los Angeles and a school like USC, around thousands of like-minded people who are as passionate as you, is incredibly useful. I met some of my best friends and collaborators there, and I’ll be back soon. But leaving Los Angeles has been one of the most freeing choices I’ve made for myself as an artist. I feel really grateful that I’m in a position to be nomadic right now, and that I have people I like to work within every corner of the country. There’s this idea as a young artist that you HAVE to be in Los Angeles to “make it,” but that’s so far from the truth. Especially with the pandemic and everything moving online, I’ve been able to maintain my sessions with Los Angeles based artists while getting to see new places and make music in a way I never thought I’d be able to.

On the topic of leaving school: I went into college knowing I wouldn’t graduate. USC is an insanely expensive school, and I’m lucky to have been able to attend at all. Also, nobody is going to stop listening to your music because you don’t have a degree. I’m grateful for the amazing people I met, and those relationships are way more meaningful to me than a degree in Popular Music would have been.

W: With a lot of the press written about you, there’s a sense of a building buzz, with many publications, including this one, labeling you as “an artist on the rise.” I am always curious as to what it’s like being on the other side of this. Is this something you become aware of and does it ever create a sense of pressure or expectations for you, the artist?

M: For a minute there, I felt like I was shouting into the void with my music, so to have people and publications like this one take note and recognize the amount of work that’s going into this project is incredible. I like to think I work pretty well under pressure, so it’s not something that scares me at all. I’m at the very beginning of my career and the external pressure is relatively low, so if I was getting overwhelmed at this point, I would probably be fucked, haha.

W: I was impressed that you shot the “One Eye Open” video on 16mm. That’s not something you see too often these days in cinema, let alone music. What inspired you to go that route and can you talk about that experience of shooting that way?

M: That concept came from the two ridiculously talented ladies that handled the video: Lauren Cabanas (Director) and Haley Minyoung Kreofsky (Director of Photography). They came up with the idea of shooting it all on film and wrote the treatment, so I really can’t take any credit. Normally, I like to be extremely hands-on in every aspect of my projects, so it was a nice change of pace and a good lesson in patience for me to let someone else run with it. They KILLED IT!!

W: You’re a pop artist operating completely independently without a label. How has that helped shape your identity further as an artist? Are there any surprising elements of this as either a pro or con? If the right offer came around, would you consider it?

M: Well, it’s taught me a lot about hard work, I can tell you that much. There is so much that goes into crafting a successful release – PR, distribution, playlist pitching, artwork, visual content, social media campaigns, etc. – and that’s after the song is already written and recorded. Then there’s the live aspect, which includes getting a band together, making live arrangements, figuring out tracks and lighting, and sending a thousand emails to different bookers locally and nationally. I’m a control freak, so I liked handling all those aspects, and I think it taught me how to look at my artist project in a big-picture perspective, beyond just the songs themselves. But wearing all those hats can be…overwhelming, to say the least. Now I have an incredible team – Josh Snider on management and Bryant Kitching on PR – and it’s made a huge difference and let me breathe a little easier. I think there are just as many pros and cons of being independent as there are with being signed to a label. If the perfect fit comes along, I would definitely welcome it, but right now I’m really grateful for the pace I’m moving at and the people around me.

W: I saw on your social media that you released a special Booklet for the EP with essays opening up about your headspace for the songs. I can’t imagine it’s easy to put yourself out there in art, let alone in this fashion. Has all of this been helpful as a part of the healing process? Would this be something you would consider doing again for future releases?

M: As soon as I realized that people are actually going to hear all of my saddest thoughts, I felt strongly compelled to add an explanation to them. I didn’t want anyone to get the impression that I find it cute to be depressed, or that walking around hating yourself is an acceptable way to live. I have a bit of space between who I was when I wrote the EP and who I am now, and it was interesting and cathartic to look back on everything with new eyes. Making these booklets has felt like the perfect way to honor everything this EP has done for me. I would definitely do it again.

W: On that note, what is next for you? Have you been writing / making any new songs with all the time stuck at home?

M: There’s been lots and lots of writing going on in the last six months. Bobby and I have already started working on the next project, and that’s about all I can say at the moment!

W: Finally, what music, movies, books etc have you been spending time with since quarantine began?

McCall · Nothing Even Wrong