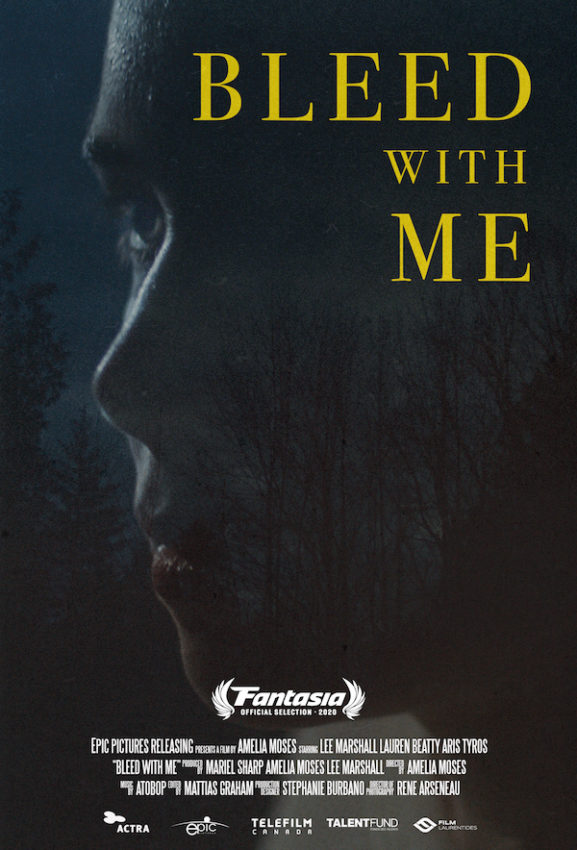 The mind is a powerful thing. In a bad state, our very own thoughts can end up being our own worst enemy. These are some of the driving forces in Bleed With Me, the new film from writer & director Amelia Moses.

Rowan (Lee Marshall) is thrilled to be asked by her friend Emily (Lauren Beatty) to spend some time up at a cozy isolated cabin, even if it does mean being the third wheel during the weekend getaway to Emily and Emily’s boyfriend Brendan (Aris Tyros). What starts out as a fun time getting drunk, playing games, and telling spooky stories starts to transform into something else entirely.

At night, Rowan starts getting strange visions that seem like her own friend is doing something nefarious with her blood. She isn’t sure if it is all in her head and she is just drunk or hallucinating but soon she can’t quite shake the feeling that something is off. This becomes difficult as she is a guest there and she’s a bit of a loner so she doesn’t want to screw up the one solid friendship that she has.

Moses carefully crafts the sort of horror film that is less shock and awe than a psychological horror drenched in an atmospheric slow burn. While there are plenty of moments of a lingering unsettling or creepy feeling, there are no cheap jump scares or tricks here. Like Rowan, we are unsure if what we are seeing her experience is really going down that way or if it is all just a creation of her mind.

Moses explores ideas of insecurities and anxieties felt in friendship, especially for someone that lacks a great deal of self-confidence. We see the bonds of their friendship start to slowly crumble as she isn’t sure who she can trust, not even her own self.

While there is a nice sense of atmosphere and a feeling of general unshakeable unease, the film starts to become a bit too repetitive with the way it explores Rowan’s confusion. I admire the film’s dedication to keeping things ambiguous and leaving it up to audience interpretation. The Groundhog Day nature of isolation is well captured and obviously intended, but there’s only so much that can be done with that to a point, and the eventual payoff is too little too late and doesn’t land in a satisfactory way.

But for a single location independent film, Moses and cinematographer René Arseneau make the most of the cabin, deftly using its confines to bring this disorienting experience to fruition – as does the unsettling score from Dominic Caterina. Then there is the trio of strong performances, with Marshall’s revelatory performance as the standout.

When it comes to a display of atmospheric psychological horror, Bleed With Me really does have its moments. Everyone will have their own interpretations of what exactly goes down. While it does showcase Moses as a talent to keep an eye on, it doesn’t quite stick the ending to satisfy what was an interesting experience that could have been so much more.

Bleed With Me is screening as part of the virtual 2020 Fantasia Film Festival and doesn’t currently have US distribution.