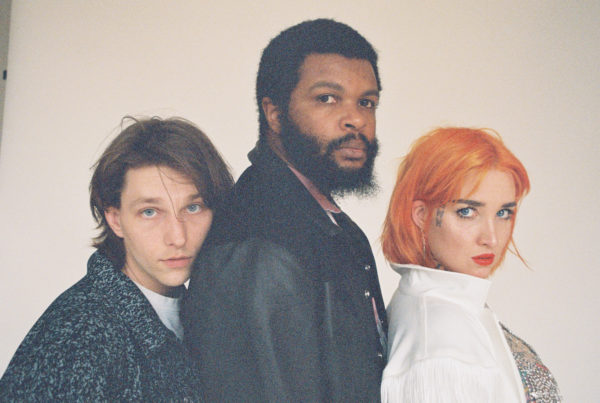 On Friday Chicago trio DEHD returned with their third album Flower Of Devotion via Fire Talk Records. It’s a big sonic leap forward for the band who sounds as confident as ever, while still keeping their sound very much intact.

We had the chance to chat with DEHD’s Jason Balla about the sonic shift forward, the quick follow-up from their last record, his process with Emily Kempf, how they’re getting through this tough time, and much more.

Find our conversation with Jason Balla below.

Will: First off, how are you guys during with everything quarantine related? Are you guys still all in Chicago?

Jason: Yeah we’re holding it down here in Chicago still. Things are as good as they can be all things considered.

W: Congrats on Flower Of Devotion! Did you guys ever consider postponing the record due to circumstances or did you see it as a chance to give people something to help them get through such a trying time?

J: Thanks! We actually pushed it back 2 months! Things were supposed to start rolling when the country started locking down. It seems like years ago since then! I’m really glad we pushed it back and that our team was understanding. If folks can use it as a way to relate to what’s going on inside them or around them right now I think it’ll be doing its job.

W: Have you been recording any more new stuff – Dehd or otherwise – as a result of the downtime?

J: I just moved actually and set up a little studio in my new apartment. Mostly just some tests, and solo stuff for me. Definitely looking forward to when we can get back in the practice space and start writing again. We have like a handful of demos of new music we’re gonna have to dig out of the voice memos when the time comes.

W: Does it feel strange not getting to tour in support of it right now? I can only imagine the financial effects of it, are you guys doing ok?

J: Yeah! All we really wanna do right now is be able to play shows and share the songs lives with people who are getting the chance to hear them now. It’s definitely a wrench into all the plans we had for the year, but it’s also been a blessing in disguise. We’ve been home and able to focus our energy elsewhere that might have been on the back burner if we were away from home and always moving around on tour, playing shows. We’re gonna be okay and when shows are back on it’s gonna be hard not to hug everyone!

W: Your last album Water came out last year. How quickly did you start writing the new one and did you intend to follow it up quickly or did it just happen organically?

J: The way putting that record out worked had the record done 2 years before we actually put it out. So there was quite a bit of distance between that record and those songs. Flower came on so quickly mostly because we were touring so much more and practicing a lot more. It seems every time we get in the room together a song comes out. We lived a lotta life in between Water and Flower and it just came out the pa speaker in our space.

W: Sonically, this record is a big leap forward for you guys but your sound is still very much intact. Was it hard to find that balance, was there any trepidation about having a more polished production this time around?

J: When we talk about the “Dehd sound” it’s really wrapped up in the way we write songs. Everyone has such their own vibe on their instrument, for me recording it all is really just to turn it up (shout out my mentor Matt Hannigan for this amazing, and simple outlook on sound) and make it sound as full and cool as it does in the room. We rented out a studio and it was just the three of us in there. We tracked everything live still for that energy. I was literally in the control room with my guitar, hitting record, and then strumming away.

W: What influenced you guys during this recording, if there were any bands or other form of media that helped inspire you?

J: It seems like a kitchen sink of inspiration, but bands like Broadcast and Cocteau Twins were on my mind. Kinda vibey synthed out, magic in the space between notes and melody kind of vibe. Em had some old school rockers and country crooners knockin around. A big part of the new record and our influence was just experimentation with drum machines and synths. I think it just opened our heads.

W: A big part of your sound – for me – is the vocal interplay between Emily + Jason. Can you discuss your songwriting process and if you guys co-write together or if you write individually, how are the vocal duties decided and split up?

JB: We each write the words we say. We just throw it at the wall while we’re writing the song and whatever sticks, sticks. We’ve gotten a lot better at this over the years and all three of us are really listening to what each other are doing. If someone is on to something, we let them take the rest of us there.

W: A lot has already been said about your breakup from past rounds of press. But has the fact that you’ve been able to keep working together since furthered your bond as both people and songwriters? Seems like you had fun with this on “Haha”

J: The breakup is ancient history. It was a great opportunity with Flower to show that we’re a band first and foremost. When we wrote about Water that was what was going on. With Flower, it’s what’s going on with our lives. Different struggles and new insights into life. That time really was wild and the three of us came out of it better communicators and as good friends. A great recipe for making music if you ask me.

W: Emily has her own tattoo shop Time Being Tattoo. How has the pandemic affected that, is there anything fans can do to help in any way?

J: They actually recently opened back up for business as Chicago’s restrictions have opened things up a bit here in Chicago. I think the best form of support would be booking work, but another important thing to mention is that Time Being is running weekly supply drives to distribute to various communities of need throughout Chicago. If anyone reading this is local, check out their gram and give if you can.

W: I know here in NYC a lot of people are worried about the live music landscape, especially for smaller DIY venues. I’m sure Chicago is going through a similar situation. Do you think small venues will be able to survive such an uncertain time?

J: I really hope that places can hang on. This whole thing just shows how fragile the individual can be and how important the places with personality and identity are to making life good. It’s a good time to help out if you can. I think that this whole music thing means so much to so many of us that either we can help these places hang on, or new places will hopefully take their place. We need to keep the interests in the music community out of the hands of the big companies. Keep it local, keep it caring.

W: To end on a lighter note, what stuff have you guys been listening to/watching/reading to help pass the time stuck at home?

J: lots of good books: If Beale Street Could Talk by James Baldwin, Native Son by Richard Wright, We Were Eight Years in Power by Ta-Nehisi Coates. Also been on that Ken Burns Civil War doc tip.

Flower Of Devotion is able to pre-order now right here.