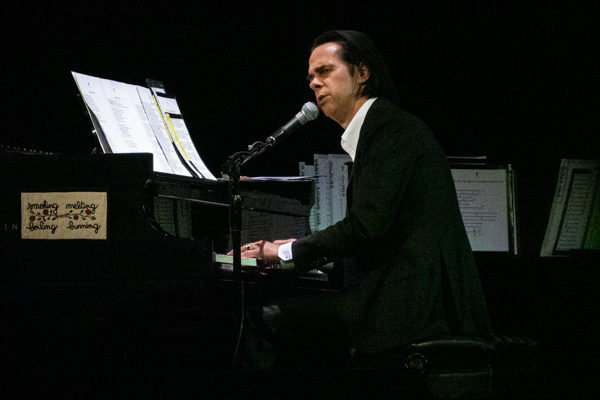 As someone who has witnessed Nick Cave in person upfront and center at a number of his concerts, I can attest that it is a most intense experience, nearly religious for some. Not only does his music move me lyrically and dramatically, but the way he prowls on the edge of the audience, extends his hand to grasp those reaching out to him, and stares back into those eyes meeting his gaze – all these interactive elements combine to make him one of the best live performers that I’ve seen. But he is not content to let the performance speak for itself. Since the spring of last year, Cave has sought to deepen that connection with his fans by conducting a series of events billed as conversations with him.

Loosely described, for these events Cave appears on stage with a piano and some microphones (one for talking and one for singing), and for a few hours, he fields questions from the audience and from time to time, sings and plays and a song on the piano. I was fortunate enough to catch an early session last year in Brooklyn. Last week, I attended The Town Hall in Manhattan for another sold out event.

For this particular meeting, 18 or so lucky fans were asked to sit at small cabaret-style tables along the back of the stage, which only added to the sense that Cage desires to be a man of the people. At precisely 8 pm, Cave took to the stage, sat at a grand piano and started with “The Ship Song” from his 1990 album, The Good Song. Upon the song’s conclusion, he stood up and teasingly chastised the latecomers, but did excuse a fan on crutches. He went on to describe these events as not only fulfilling his need to connect with people especially after the tragic death of his son Arthur in 2015 but also helping his fans who are suffering themselves. We are all grieving or feeling sorrow to a certain degree for whatever reason, and are in need of comfort, and we need not feel so alone in our journey.

Nick Cave is a very thoughtful man, as evidenced by his responses in these conversations as well as in his regular postings to The Red Hand Files, which sprung forth as an offshoot of doing the live events. He is also darkly funny at times. Topics covered a full range including the philosophical, the personal, potential meaning behind his works, his relationships with other musicians, what he thinks of Vegemite (“It’s beautiful.”).

“What Warren [Ellis] does, I don’t have a clue.”
[Talking about the song “The Mercy Seat”] “Fuck you, Johnny Cash covered me!”
“Happiness is an act of defiance.”

Logistically speaking, I found the more recent event I went to much more streamlined than its earlier iteration. There were a good number of ushers with brightly colored safety vests and flashing batons scattered throughout the venue, monitoring the audience for raised arms, ready to pass a microphone to someone wanting to ask a question. Cave also suggested that we need not clap after each question and answer to cut back on downtime, unless a response was “truly, truly great.” By my count, this allowed for over 40 people to talk to Cave directly over the 2 hours and 45 minutes, which is no small feat.

He also played about 15 songs, which could have made for a satisfying evening in of itself had he not even done the conversation part. Most of the selections were stripped-down versions of songs from his work with The Bad Seeds, but he did include some covers including Leonard Cohen’s “Avalanche” and a few a cappella verses of the recently departed Daniel Johnson’s “Devil Town.” When he was asked about his upcoming LP, Ghosteen, due out on October 3rd, Cave talked about the meaning of the album title but unfortunately was unable to play any songs from it due to contractual obligations. I especially loved when he closed the evening with his incredible rendition of “Stagger Lee” on the piano.

While I am not privy to all the questions posed by the audience members for every single one of these events, I imagine that each event is as unique and random as the questions asked, meaning no two events will be exactly the same. So it is absolutely worth going to multiple conversation sessions with Nick Cave if you have the ability. He is a very entertaining and engaging person, and constantly evolving and pushing forth. Now that I’ve attended two of these meetings, I can’t say that I am anywhere near an expert about the inner workings of Nick Cave, but for a few hours we were allowed a rare glimpse into the artist as a human being and not just as a far-removed object of our admiration that you don’t usually get to tap into, and hopefully we all felt a sense of connectedness with a room full of strangers on a basic level.