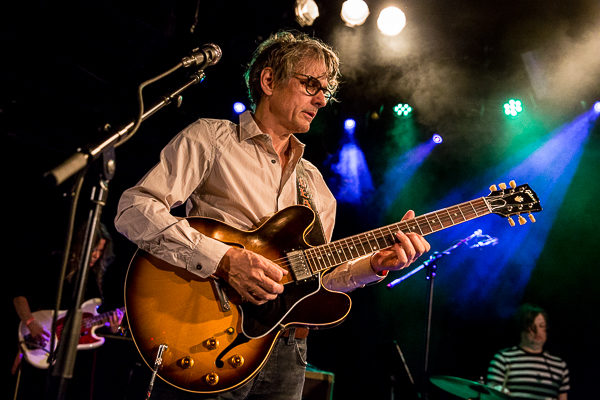 Last month, Dean Wareham (of Luna and Galaxie 500) and Cheval Sombre played the first of their three shows in support of their album, Dean Wareham Vs. Cheval Sombre, at (le) poisson rouge, and our photographer Qbertplaya was there to capture it – and you can find her photos here. She had the opportunity to follow up the show with questions for Dean Wareham, which he kindly answered over email.

Find their full discussion below:

Qbertplaya: I’m curious about when and how this project was initiated. Had you and Chris Propora aka Cheval Sombre worked together before?

Dean Wareham: We have. . .Britta [Phillips] and I played on the first Cheval Sombre albums, produced by Sonic Boom, who was staying at our Manhattan apartment while recording Cheval Sombre out in Jersey City. We added electric guitar and bass, and and we released that album on our Double Feature label.

Q: Were you both wholly familiar with the songs that were covered before you decided to make an album together?

DW: Not all of them. I had never heard of Blaze Foley till Chris started recording his amazing song “If I Could Only Fly” and I don’t think Chris had heard “The Bend in the River” (originally by Marty Robbins), or “Mountains of the Moon” which was written by my friend Michael Holland.

Q: I was listening to the album while riding in a car with my husband, who admittedly does not pay attention to music as much as I do. It surprised me when he started singing along to “Wand’rin’ Star” from the musical Paint Your Wagon, as he generally dislikes musicals. I asked him how he knew that song, and he said he learned it while in middle school choir. Are the ten tracks that appear on the album songs that either of you particularly loved or grew up with and thought it’d be a great idea to cover? Were some of the songs favorites of yours and others Chris favorites? How much of the same sensibility in choosing these songs did you share?

DW: On this record, he who sings it chose it! We talked about a “cowboy” album, and maybe I took it more literally; most of the songs I picked were from Hollywood westerns. Chris went with more modern songwriters like Dylan, Townes Van Zandt.

My parents played Marty Robbins album Gunfighter Ballads being played in the house — I imagine a lot of our parents bought that one in the early 1960s. “Wand’rin’ Star” was actually a number 1 hit for Lee Marvin in the UK, on the only song he ever recorded. We should all be so lucky.

Q: I also love the inclusion of the more recent “Grand Canyon” by The Magnetic Fields, although it is nearly 20 years old! Were you able to run the track by Stephin Merritt to see what he thought about your rendition?

DW: Well that’s one Chris chose and it’s the one song on the record I don’t even play on, it’s all Chris with Jason Quever on the piano. I believe Chris sent Stephin a copy of the album; they both live up the Hudson River in NY State and they run into each other occasionally, but I did not get any feedback on what he thinks. I worked with Stephin way back in the early ‘90s, singing on that first album by the Sixths.

Q: So you’re LA-based and Chris is NY-based – how did you coordinate developing this project? In my head, I’m imagining something akin to how Ben Gibbard and Jimmy Tamborello aka The Postal Service would mail each other work leading to their album Give Up, a process I found very romantic. Thankfully, technology has improved in the last 15+ years, allowing people to transmit stuff magically over this thing called the Internet. Would you physically get together in one place leading up to the actual recording sessions? I imagine coordination could be difficult with both of you working on other projects as well.

DW: Not much happened via the internet, except buying plane tickets . . . Chris flew out here and we recorded as much as we could in a 3-day spell in Jason’s studio in a warehouse in the downtown LA arts district. Then Chris flew home and Jason and Britta and I added extra guitars, violins, percussion etc. The one instrument recorded remotely was the musical saw on “My Rifle My Pony & Me” which was sent in by my friend Gryphon Rue.

Q: Were there any songs you care to mention that did not make the final cut?

DW: We recorded a few different versions of “Lonesome Cowboy Bill” by the Velvet Underground — this was Chris’s idea. In fact, I had Luna in the studio around the same time and we did a version of it, and released a split 7” with Cheval Sombre on one side, Luna on the other, both doing the song. The only other track that we completed but did not include was “Along the Santa Fe Trail” which again is from an old Hollywood western — that also was released as a one-sided 7” single.

Q: In listening to this album, I became interested in checking out the original versions and comparing. I love your final product, which has a consistent, dreamy quality that serves as a soundscape that transports the listener to a place that evokes imagery of westerns. There’s definitely a cinematic quality to hearing the album. You’re no stranger to doing soundtrack work for movies. Are there any particular movies that might have inspired you in producing these songs? Do you have any favorite western movies?

DW: I like late-period westerns by Sam Peckinpah (The Wild Bunch) and for music, you can’t beat the spaghetti westerns, so much beautiful music recorded for these by Ennio Morricone and Pino Donaggio and others. For inspiration, I also visited the Gene Autry Museum here in Los Angeles.

Q: Lastly, for my own curiosity, can you describe your favorite sandwich? =)

DW: Does it have to be just one? As a child growing up in New Zealand and Australia, my mother sent me to school with Vegemite & lettuce sandwiches in my lunch box. That probably sounds awful to you but we liked them. On the other end of the spectrum, one thing I miss about NYC is the brisket sandwich from Katz’s. I lived across the street from there in 2002 and one of those sandwiches was good for lunch and dinner.