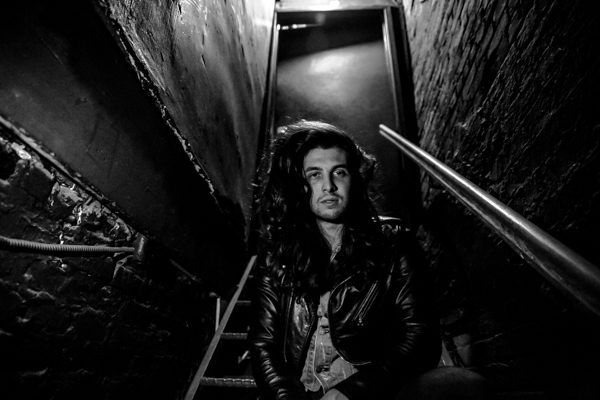 A guitar, a deep and soulful voice, and an array of tunes designed to pick at the haunting and most intimate moments imaginable was all Billy Raffoul needed to delight a packed Mercury Lounge on November 13th. The 24-year-old Canadian entertained his fans with not just already known songs, but a few that have yet to be released. Oh, and he also made sure they knew just how funny he was as he performed in New York as a headliner for the first time in his career. Before the show, Raffoul sat down with We All Want Someone’s Omar Kasrawi to talk about his career, how he taps into such emotional subjects, his love of New York, and what Stan Lee means to him. Below are excerpts from the interview.

Omar: For my money, some of the most interesting rock music these days is coming from Canadian bands. You’ve got Black Pistol Fire, Reignwolf, yourself. What gives? What’re you putting in the water up there?

Billy: Dude, it’s so cool you to ask or say I am. Very proud to be from Canada and specifically the music that comes out of there, I think, like you, is very cool. I dunno, growing up I always thought. I always thought Canadian Music sounded different…I think there’s there’s something about it and something specifically about the writing that I don’t know, I get a sense of pride, especially when I listen to it in those two rock bands that you just mentioned. They’re incredible. 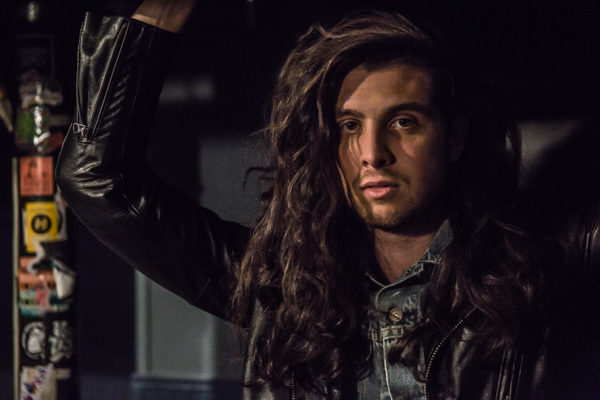 O: Speaking of Canadian music and writing, your dad is also an accomplished musician. How does that does that affect your creative process in any way? Do you ever bounce stuff off off him or go to him for advice? Or is it more like, “I’m doing my own stuff,” because you both have your own distinct sounds?

B: It’s been nothing but a blessing. You know when I started playing locally, you know, obviously his work and his music and his voice and everything cast a huge shadow, especially locally where I’m from. So, a lot of people would ask me growing up, “You know, is that hard?” But it’s the exact opposite. It’s amazing.

It’s gotten me in the door so many places where you might normally have to audition to play this bar or know someone…but from the creative, it’s just been so cool to see him write songs for years and years and years and learn tricks and hear his influences, which end up being big influences on me in a different way because I’m hearing these records through him, whereas he might have went out and found them. We totally bounce ideas off of each other. We write songs with each other. I’ve written songs that he would use. He’s written bits of songs and I would use them, back and forth. Even right now he’s getting ready to put out his seventh record which is crazy and he’s cutting a song I wrote. So, yeah. 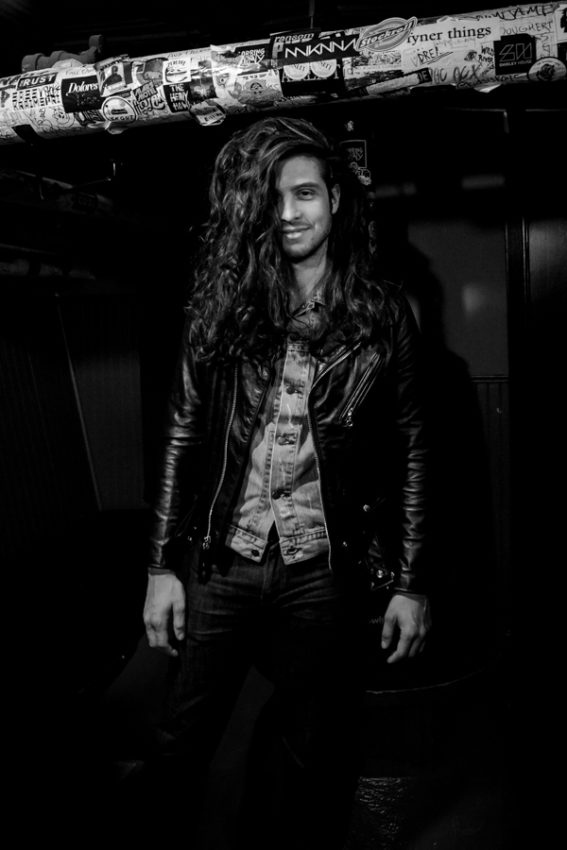 O: The first time I heard your stuff was at Irving [Plaza], when you were opening for ZZ Ward (Note: with Black Pistol Fire on the bill). And I hadn’t done an in-depth listen, but I was expecting the balladeer to come on stage with music that sounds made for that heartbreaking moment in a dramatic major motion picture. But then you came out on stage, totally plugged in and grooving like a classic rock legend. What goes into that kind of a performance versus one like tonight where it’ll just be you and your guitar?

B: I appreciate you saying all of that man. I grew up very much in the Beatles, the early classic rock, you know, the British invasion…everything my father listened to and my father’s inspired by. So I would get that from him. And then what time came time for me to listen to the shit that I wanted to hear, without his influence or you know, even though it was great influence, it was bands like The White Stripes, The Black Keys, and Arctic Monkeys.

And I was 13, 14-years-old discovering these bands and I love the heavy guitar…huge fan of Dan Auerbach. I would remember going to see him live…he had like three or four amps on stage, so yeah, you know that was a heavy influence.

I love getting up there and being able to turn up and even play heavier versions of some of the records that are released already that don’t necessarily have electric guitar on the recording…Tonight I’m doing a solo acoustic set with some pads at my feet so it’s gonna be very different than what you’ve heard but I’m equally as excited about it. 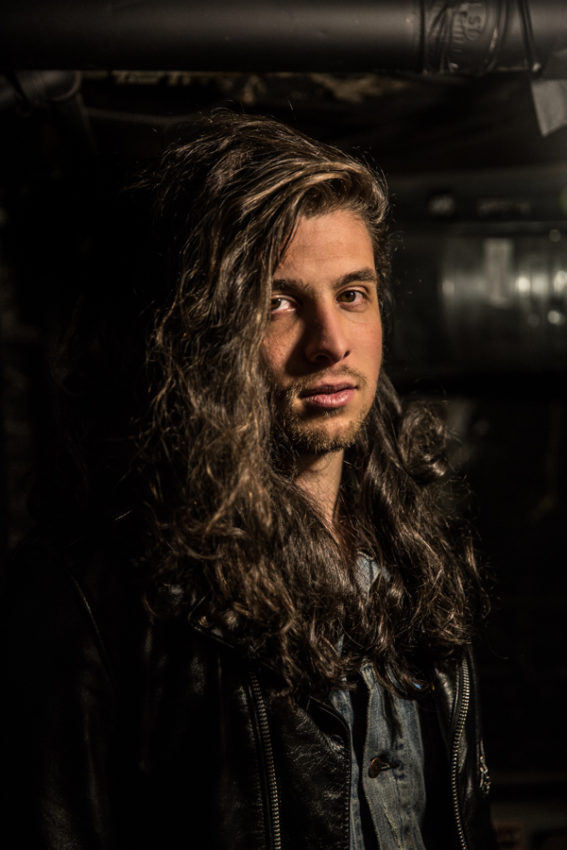 O: So after that Irving show, I had to go back and really listen to the songs, especially the lyrics. And I’m listening to a lot of pain and desolation. And you’re only in your early twenties, so I’m thinking either you’ve seen some shit or you’ve got a mutant empathic ability that’s tapped into everyone around you. Which is it?

B: A lot of that comes from my family and my family’s experience. I’m from two incredibly creative parents who have done so much to encourage me…I sing about their experiences. My father’s family moved to Canada from Lebanon…My grandparents were, they couldn’t have been more than ten-years-old when they came to Canada from Lebanon. So, I am always constantly inspired by them and their courage and decision to come to Canada. And then on top of that, everything my father, you know seeing on the road and lived as a musician for like 35 years.

My mother’s childhood is a big inspiration on the song “1975,” which is what that was about. My mom’s upbringing not mine…But I hope I don’t sound too sad all the time but a lot of the songs you’ll hear tonight are about friends of mine who’ve gone through something. It’s not always me personally. So you’ve got that, you’ve nailed that right on the head and it’s more so people around me…I have a song called “Running Wild” that will be released in the New Year…I’ll perform it this evening, which is inspired by a good friend of mine, one of my best friends and relatives that I grew up with…playing sports in the street. Playing hockey together, years and years. Taught each other how to play sports and rollerblade and you know, on the same teams…He had an aneurysm. Terrible…It was just a crazy thing.

He pulled through somehow. Miracle. Seriously, like the brain surgeon essentially brought him back to life. It was just, it was remarkable and he was in he was in a coma for a while and…he pulled through and I think originally his arm and leg were rendered useless, but then he started to get his leg back and now he can walk with a cane. He’s a walking miracle. It’s crazy and that song “Running Wild,” it’s about him and our childhood, kind of growing up until that moment.

It actually happened at my house. Serious. Yeah I mean a lot of those stories, I mean they’re not all that fortunate…just talked to him earlier today. He’s he’s just doing well. But a lot of them come from real experiences and real places.

O: When you play a venue like [Mercury Lounge], that’s not on the scale of Irving Plaza, what are you drawing on from the crowd?

B: This is a tour like nothing else I’ve done before so I’m so excited. This is the first headlining tour I’ve ever done. This the first time people are paying to hear me as a headliner here…It’s just crazy these last five shows, seven shows, have been a crazy connection with the audience to the point where they can sing the song back or the chorus back or that kind of thing. But I grew up playing in bars and they were either really loud noisy bars because everyone was drunk or they were really quiet bars because no one was there.

And I think the goal I always think I was always chasing is putting them together. And that’s a lot of people in the room being very quiet and I’ve gotten to experience that so much on this tour. It’s just been amazing. Just attentive audiences that can really hear every word. But at the same time, I can get them to clap or sing and that’s…that’s when I think I’m at my best. When I know that what I’m saying is really getting through to the people and I hope to do that tonight.

O: This being your first headlining tour in New York…what does this city mean to you?

B: So special. I’ve had an Aunt live a couple of blocks from here. So, Brenna she’ll be here tonight. And it’s been so cool always coming here and this is the first tour where we have hotel rooms. Coming here, you know, like normally I’d crash on her couch or I’d come here to write. I’ve written a bunch of songs in New York…This is a venue I’ve opened for other artists stretching back five years. I hope to be able to go through all the venues I’ve played in New York as an opener, as a headliner. So you know, it’s so special and it’s, this city is like no other.

O: What are some of the songs you’ve written in New York?

B: A song called “Swimming in the Deep End,” which is again, unreleased, but it will be coming in the new year. It’ll be in the set tonight. I wrote in on Seventh Avenue.

O: One last question, you’re wearing a Hulk t-shirt right now (note: this interview took place the day after Stan Lee’s death was announced), are you a comic book fan? If so, what does Stan Lee mean to you?

B: Oh man, I know…dude. And we were we actually did something at a great place in Brooklyn here today called the Superhero Supply which is like a non-profit after school program for kids. They go in there and they can dress up…and you can literally buy like your cape, your belt. You can design your own superhero kind of thing.

Not to get off topic, but yeah, growing up heavy into superheroes and the comics. Marvel, and DC as well…big Batman fan. And Captain America was my favorite Marvel character for sure. Stan Lee, it’s obviously very sad. 95 years…what he did, it’s just insane. All these stories and all these characters. For hours, I’d map out what [comics] do I need next. It’s like a big spider web, literally what’s connected to who and how to, what’s the next…comic series to read. And you know, it’s ever evolving. People are still writing stories with those characters he created. And it’s going to go on forever.

Find photos from Raffoul’s performance later that night posted in the gallery below, all taken by Omar Kasrawi. 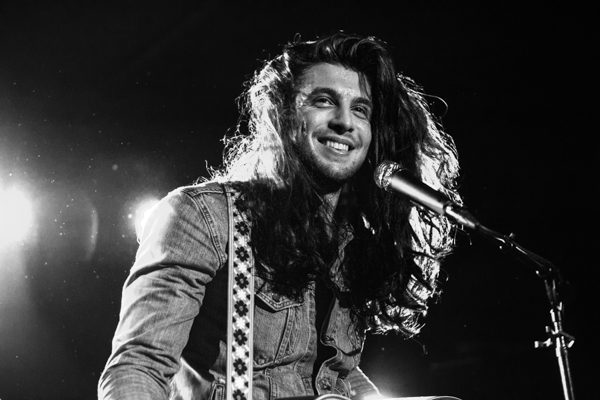 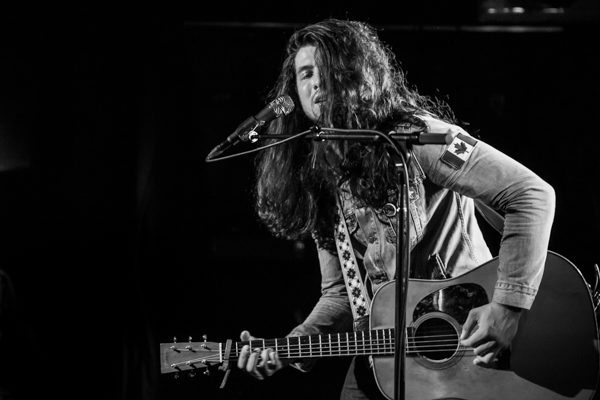 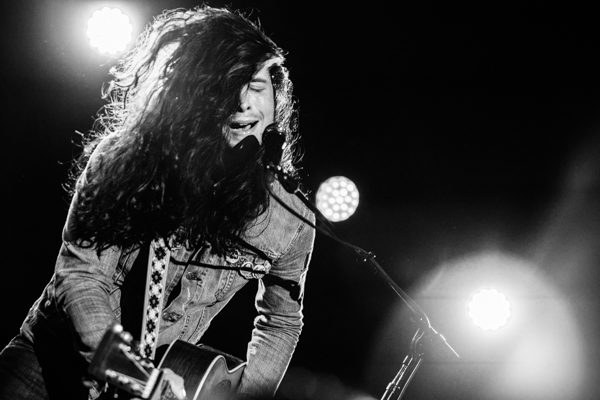 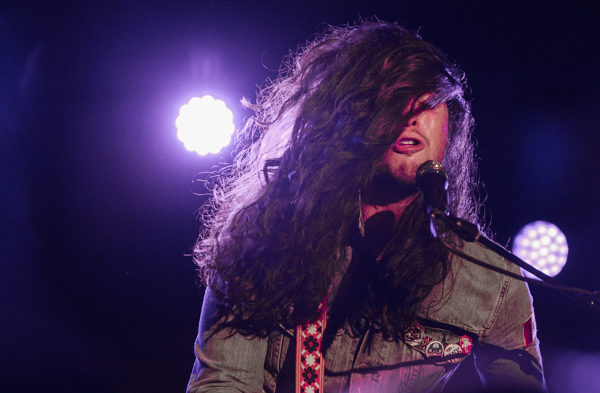 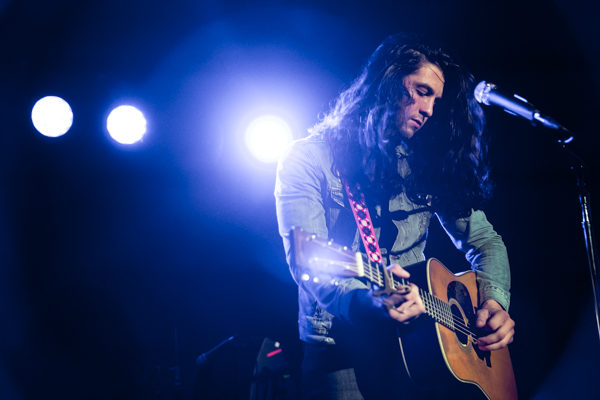 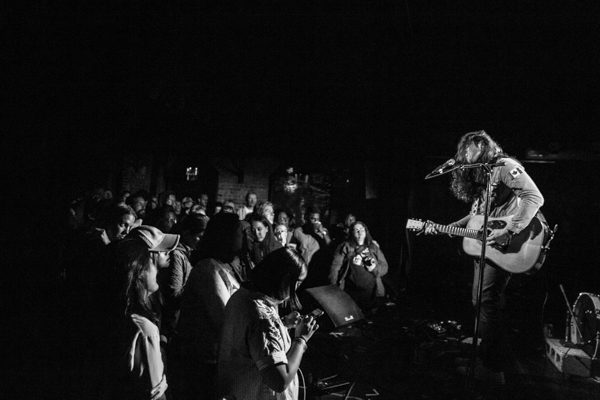 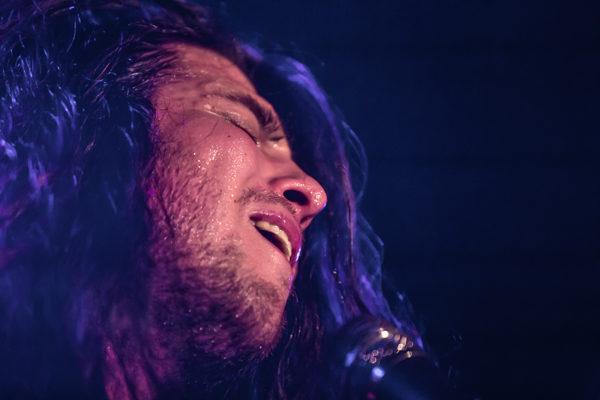 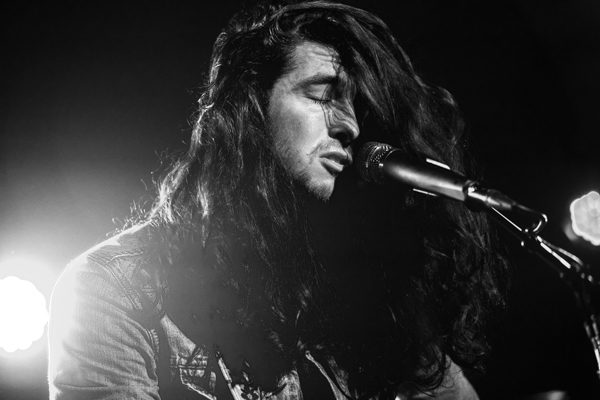 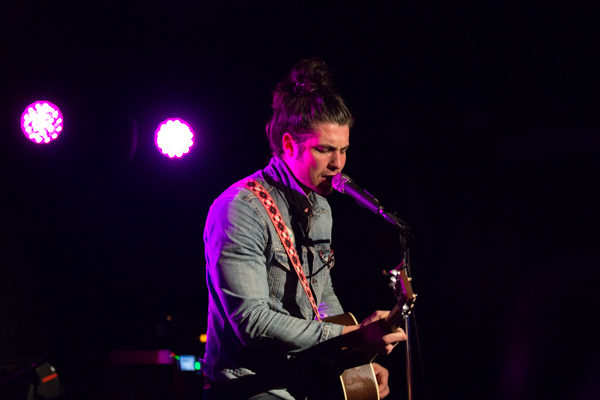 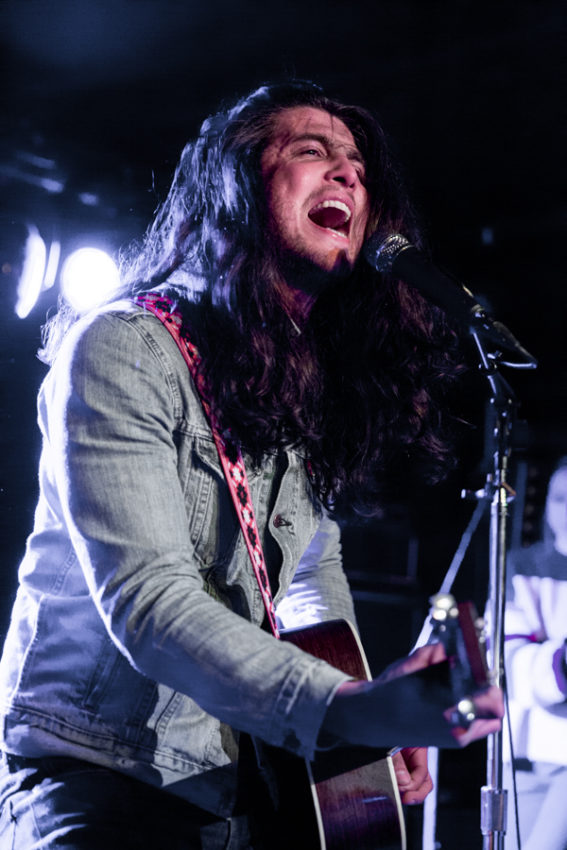 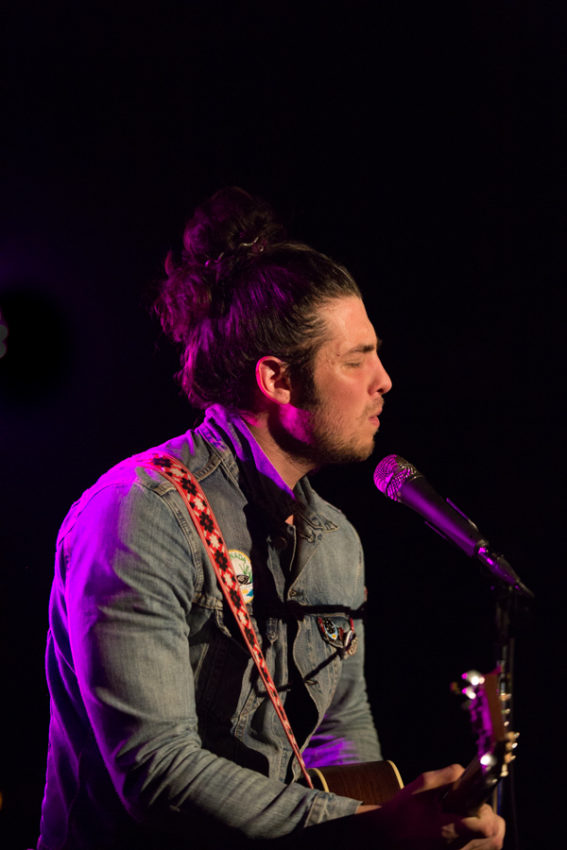