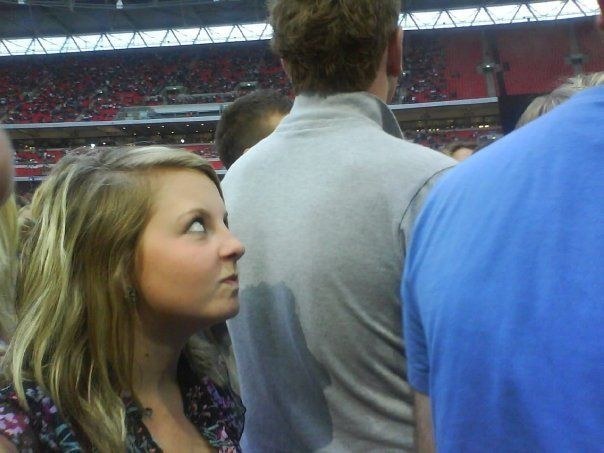 Hey guys, it’s me. The tall guy in front of you at shows (it’s even in my twitter bio). If you’ve seen a show in the city anytime in the past ten years, there’s a decent chance I am somewhere in the bottom frame of your instagram post. Sorry about that. Lots of people express their frustration to me at shows and I can understand why one would be annoyed when they paid good money to see their favorite artist, and then a tree shows up and destroys the entire evening for you. But trust me when I say that I take no pleasure in this, and often wish I could shrink just so I could enjoy a show without waiting to receive that all too familiar shoulder tap.

As I’m sure you’re aware if you read this blog, I go to a lot of shows, and usually have to stand somewhere near the front in order to take photos as a part of my coverage. And there are some people who understand this once they see the camera, and even without it many people are fine with it, as long as I arrived early, am polite and aware of my surroundings. I do feel bad about it, trust me. Half of my time waiting before the act is spent trying not to look anywhere behind me, as I’m sure there is a thousand eyes trying to stare a hole straight through my head. I’ve been told plenty of times about me being too tall to stand there, been asked passive aggressively what I’m doing standing near the front, all that good stuff. Hell, just last year I was shoved by a woman as I was leaving a venue after the show ended. I was quite shocked and confused at what I did to possible piss someone else to warrant it, until I realized that they were the couple who won the lucky lotto of standing behind me. And what could I possibly do about it? In what universe would anyone believe that a 6’6 man was actually the innocent person in this unwarranted physical encounter with a grown woman?

Thankfully this was an isolated incident, but lately, I’ve been dealing with a lot of aggressive, borderline hostile encounters at shows. I’ll usually just brush it off, but last night I think I finally had a breaking point. I arrived to my show early in order to get a good spot at doors, so at least I can say I earned the spot by arriving early. No one likes a tall guy, but everyone hates the tall guy who sneaks through during the middle of a show and places their tall body right in front of you. Believe it or not, it’s even happened to yours truly. But last night, a bunch of fellow concertgoers claimed I snuck in during the opening act, cut in, and placed myself smack in the middle of the venue. Well thing is, they were lying through their teeth. I did my part and got there early, and thought all was well. So, I stood my ground as long as I could, but when the individual I’m arguing with soon grows into a gang of three people, which soon grew into something of a mob rallying against me. It shouldn’t have felt personal, but it sure did feel that way. However it got to the point that it was time to swallow my pride and try and deescalate the situation. The best part is, after I scooted over to the side, a couple slid in front of myself and the entire party I dealt with minutes before the headliner went on. And no one said anything at all. Wonderful.

My presence at shows is considered to be a “nuisance,” to most, as NPR said in their widely discussed “Do Tall People Have To Stand In The Back Of Concerts” piece just a year ago. But here’s the thing, I don’t purposely set out to ruin your evening. I can’t help that I’m tall. But how about the other, real, nuisances out there? You know, the guys who push through you to “find their friend’ one minute before the band goes on. Or the person who holds his phone up in front of your nose to film a vertical video he probably will never watch again. Or the drunk obnoxious group of friend who rather use the time to speak loudly about whatever it is that is more important than the great concert going on right in front of them as they engage in their shouting match. But no, someone who can’t help their height and just wants to be as close to their favorite artist is the real enemy. Not the sea of cellphones that are pretty consistently blocking all our views. 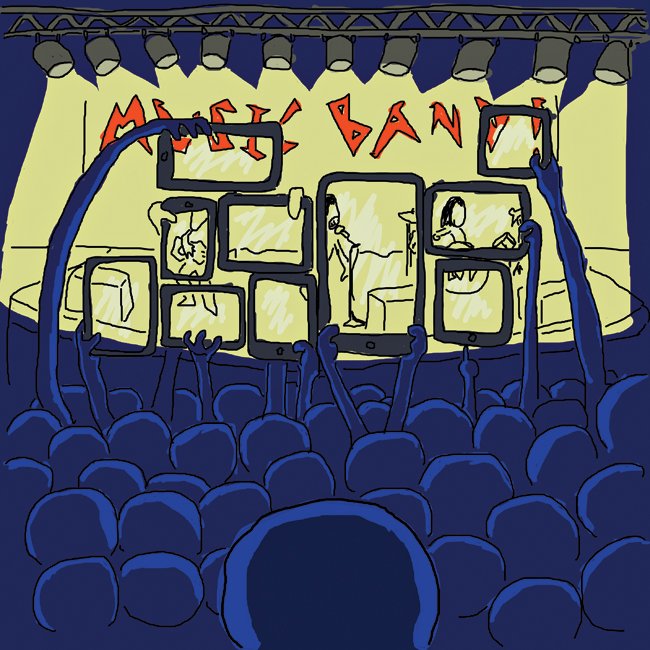 Don’t get me wrong, there’s a difference between someone cutting in last minute at a show, and someone arriving early, just like everyone else, who happens to be at a different height then you. Most people with sound logic and understanding will agree that whoever takes the time out of their day to wait on line before the show, or show up a few hours early, and subjecting themselves to a string of tedious opening bands, deserves whatever spot they get. Usually when I claim a close spot fair and square, I’ll usually just find an vacant empty space immediately behind me. Come with me to any general admission show here and you’ll see it for yourself.

But there are some times, like with the friends I made last night, that will argue with me to no end that I deserve to be placed in the back, or the side, you know, out of sight, out of mind. No matter if I got there before them. There are plenty of nights and venues where I will just gravitate to the far corner, keeping myself free of the ear-chewing. Sometimes I just don’t want to deal with it. But I end up far away from my group of friends who want to be up close, or give up the good spot to take the photos I’m assigned to take, which I probably earned by sitting on the FDR for an hour in order to get to the venue early. If you’re short and are worried about being able to see, maybe getting to a show early may be in your best interest. Or at least ask the person without spitting venom at them, as if their sole hobby in life is to ruin your night.

I hear all the passive aggressive comments about me and my height, or my stupid camera or earplugs, all of it. The irony of those earplugs is it preserves my hearing and helps me hear all your comments. All of them. So when you come at me asking less than kindly why I’m standing where I am, it comes off as someone who clearly has some sort of problem with tall people at shows. Going to shows for the past ten years, I truly believe that a lot of people have a very real hatred for tall people at shows, due to previous experiences and encounters. But it’s not fair to attribute those experiences to every tall person there. Believe me, I want nothing more than to be left alone at shows and just enjoy it like everyone else. And in what other scenario would this attitude towards someone be alright? There aren’t many. But who the hell is going to come to our defense? 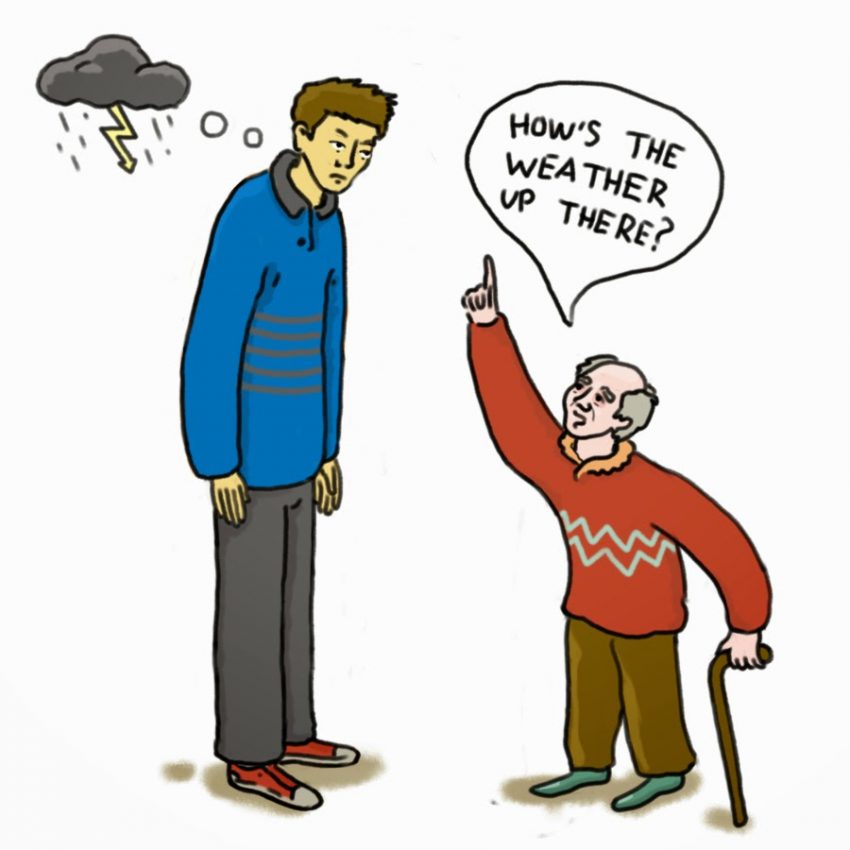 (photo via Tall.Life)
It doesn’t just end in the crowd, I’ve also dealt with hostile parties in photo pits with some of my fellow photographers. I’ve been told by most of my peers here in New York that as a tall person, I’m more than cautious and courteous to everyone and aware of my placement. Yet at Newport Folk Festival just last month I was greeted with yet some more hostility from some heigh-ho photographer who told me I had no right to be anywhere but in the back on the photo pit. Thing was, I stood in the back for the first two of our allotted three songs, and got a bit tired of other photographers, including my new friend, raising their cameras above their heads completely obstructing my shots, or the fact that no one can or wants to move around at all. So at what point do I stand up for myself, when no one does, and try to make sure I do the job that I was credentialed to do.

“Quit you’re whining, you have a good view at every show” is probably what a lot of you are thinking, and sure, that’s true. But then there’s the other things about being tall that aren’t too great. I don’t fit many cars, airplanes, beds or pairs of shoes. Taking a shower usually involves a shower head pointing at my chest. I already have some issues with my back and knees, and when I was in high school I had a few health scares involving my growth and my heart’s ability to keep up with it. Oh and yes, I do play basketball, thanks for asking. Please ask me again. So being able to see a bit better than most at shows isn’t exactly my ideal tradeoff there.

I’m sure all of you have a tall friend, lover, or family member. If you go to a show with them, and you want to be in the front, would you tell them to go to the back or to disappear to the side, while you enjoy your view? Probably not. I’m sure these same people who curse me out under their breath would change their tune if they brought someone they cared about to the show that was tall.

For all those times that a tall person cut in front of you or ruined your experience at a show, let me say on behalf of all us BFG’s out there, I am sorry. But just imagine for a second that us tall folk want to enjoy a show just like you, and maybe, just maybe, we shouldn’t be constantly relegated to the side or back bar with wall street bros just because genetics went a different route. I didn’t write this post for anyone to feel bad for us, just maybe to reconsider the next time you come out swinging at someone tall who is just there for the music.