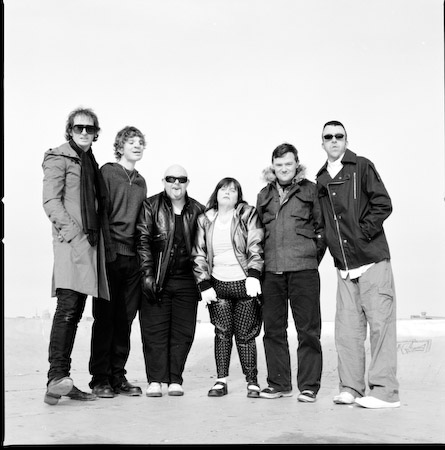 Rudely Interrupted is truly a special band from Australia. For example, they were the first band to ever play at the United Nations. What truly makes them special is that five of six of the band members have some sort of mental or physical disability (such as Blindness, Deafness, Autism and Down Syndrome). Some even have both. For example the bands frontman Rory Burnside was born without eyes, and has Aspergerâ€™s syndrome. Nothing ever got in the way of them performing as Rudely Interrupted.

In June they will be touring America in support of their debut album, Tragedy of The Commons. For you fellow New Yorkers, on 6/10 they will be at Brooklyn Bowl, and 6/11 they will be rocking Piano’s along with Sunglasses.

You can hear a song from their album below. It’s called “Close My Eyes”, and it’s a great song. It would be best to describe it as dance rock, with a powerful message. That is what Rudely Interrupted are all about. This is truly an inspiration band. They have proved that anything is possible with a little bit of heart and love.

Watch the moving music video for “Close My Eyes” below:

If you would like to support the band, buy their album on itunes.

An ideal MP3 Player is an extremely versatile and sophisticated piece of audio equipment.