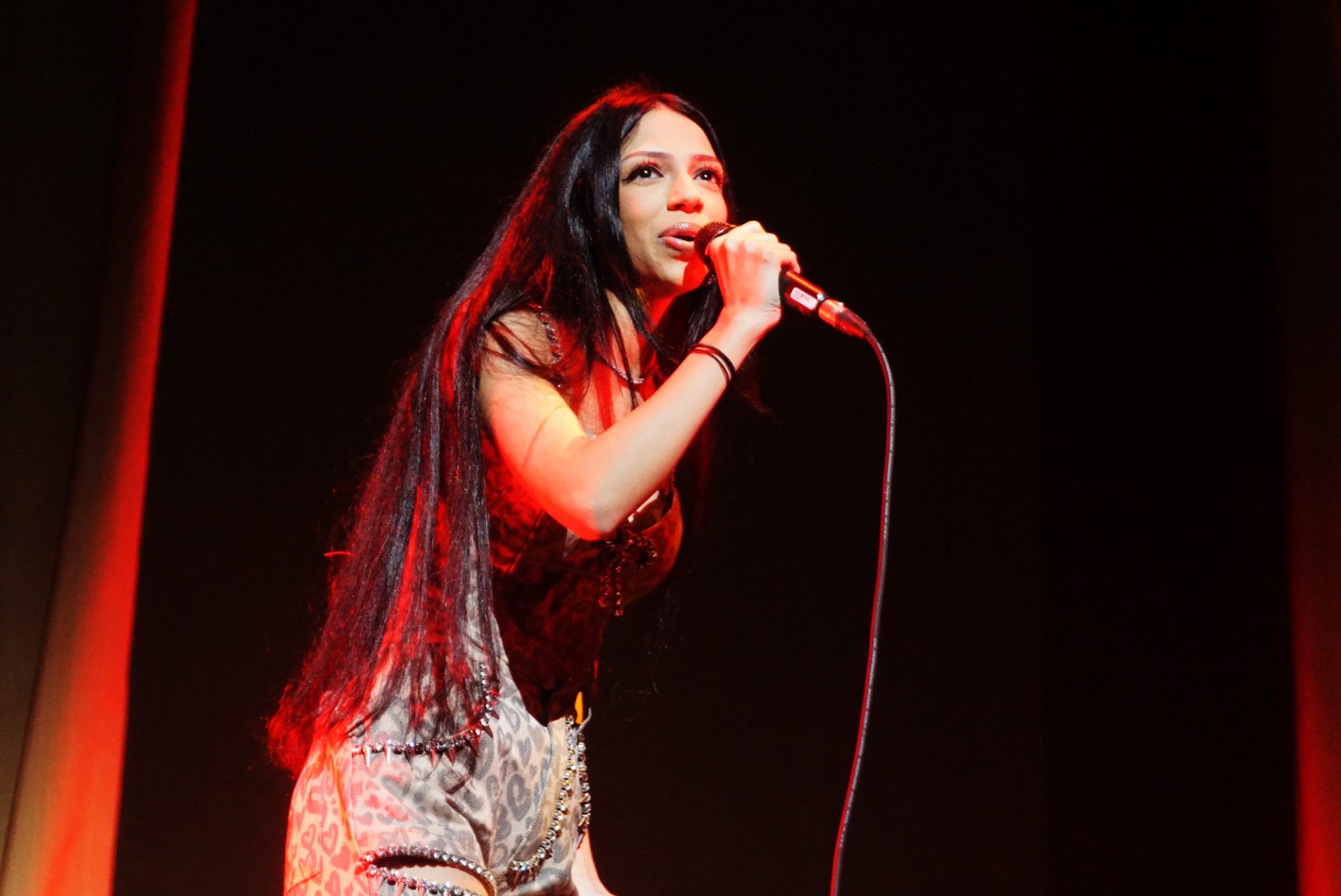 Rising r&b singer-songwriter Saleka is making her presence known, as she is currently on tour with Giveon. The tour recently stopped into New York for a pair of shows at Radio City along with a stop at Kings Theatre in Brooklyn.

Following Saleka’s performance at Radio City, our very own Ken Grand-Pierre got to chat with Saleka about the performance, the tour, the impact of being raised in an immigrant family on her music, and so much more. He also was on hand to capture photos from night 2 of Radio City.

Find his discussion with Saleka along with photos from Radio City posted below.

Ken: I feel very lucky that I got to see your performance at Radio City last weekend. There was a grace in which you approached the stage that was brilliant. What’s one word you’d use to describe how this experience meant to you? (And definitely feel free to explain why you chose that word).

Saleka: Wow, thank you so so much that compliment means everything to me. I guess one word that first comes to mind is grateful. This tour has truly been surreal, I’m learning so much and I get to open for one of my favorite artists and sing in front of the best audiences. Giveon’s fans are the coolest, sweetest, and most loving people, it is a joy to meet them and perform for them every night. It is also surreal to watch Giveon, his voice is incredible and there is this true magical energy in the room when he gets on stage. I still get chills every time! I feel so lucky to be part of these shows and this tour, it’s a dream. There are many nights I come offstage and I just start tearing up because I can’t believe I get to do this.

K: You brought up on stage that you were raised in an immigrant family. I was too, in a Haitian household, and the nuance of that is something I constantly find perplexing. On one hand, you’re part of this culture that’s rich and full of vibrancy and yet your parents want you to tread a safe and predictable path. I suspect your upbringing was a bit different but I’d love to know; do you feel being in an immigrant household inspired your songwriting in any way?

S: Growing up in an immigrant family I think influences how I view the world and that itself influences my songwriting. It’s a very defining experience to balance two different worlds as you are growing up, and for me my relationship with my culture is one that is constantly growing and changing. There have been times I’ve rejected it, times I’ve clung to it. Sometimes I can see the inspiration from it in my music clearly- like how it affects my value system and my self-image, or the art and people that I am drawn to. But there are probably also so many ways it influences me and my songwriting that I don’t even perceive consciously.

K: I was talking to a friend about you, they were familiar with your music and they mentioned how you also grew up in Philly. Philadelphia is a city with a rich music history, has one of the best venues in the country, Union Transfer. How did the city inform your love of music while you were growing up?

S: I love Philly so much, it has definitely informed my love of music, growing up watching shows in all the amazing venues here and it is also where I met so many of the musicians I work with and perform with! When I was a teenager I recorded my first songs at Milkboy Studios in Philly, and that studio is where I first felt at home making music, where I first felt like a real musician. The engineer I work with now, Joel Metzler, I met there as well. The guitarist Dai Miyazaki and the bassist Elliot Garland who are on tour with me now, I met in Philly and they are part of the incredible group of musicians in our city. Actually, a lot of Giveon’s band is also from Philly, there is something about this city that really fosters such talented and humble musicians. Everyone is so hardworking and loving, I think that’s the particular culture of the music scene in Philly.

K: After the show, I went home and delve into the music some more and the first video I watched was the lyric video for “Red Eyes.” It’s an effective visual because it really causes the words to hit you as you come. What was it like for you to put these words to paper? It’s clearly a deeply personal song and I wonder what kind of internal release you felt getting these thoughts out?

S: Red Eyes is definitely a very personal and intimate one. Writing it was very cathartic because it was one of those situations where I couldn’t tell this person how I was feeling and so this song was really me just expressing, if I could tell this person everything I wanted to and how I’m feeling what would I say? And writing it helped me understand my own emotions and actually move forward in a way. A lot of the songs on the album have functioned that way in my life- by helping me process experiences that I was struggling to process in normal ways.

K: In the song you say “I’m just another flame you love to play with” Has anyone brought up how that lyric cuts through the noise and hits close to the chest? I feel like that’s a lyric someone would feel grateful to hear sung out loud.

S: Ahh I’m so glad you resonate with that line that it’s definitely a key emotional moment in the song, especially when I sing it live.

K: The last song you performed at Radio City (night 2), I’d love to hear the story about it. There’s this smoothness that song has which is powerful and also has an emphasis on your voice in a way that feels very fitting, especially the parts where you sing “one more night”

S: Thank you so much! “One More Night” is one of the songs I wrote for the Apple Tv+ show “Servant”. The EP I created for that show has a slightly different sound, more jazz based and with sparse live instrumentation. The moment that this song is featured is one of intense power but emotional vulnerability for the main character, so I wanted to lyrics to feel very raw. I drew from personal moments that made me feel that way, and wrote the song about what it feels like when you are not ready to let go of someone, even when you know it won’t last. When you’d rather stay in pain a little longer than let them go. (Yea, depressing haha I’m sorry)

K: I have two friends, Charlene and Liann Kaye, two sisters who collaborate similarly as you do with your sister Ishana. I feel lucky to have witnessed how those collaborations has grown the relationship between those friends of mine and I’d love to know how you feel that’s been the case for you; how has working with Ishana made you a better artist?

S: Ishana definitely makes me a better artist, working with her is so much fun and always a dream collaborative process. I am very inspired by her work and her storytelling, and the way she visualizes things. She is also very musical herself and can effortlessly lean into the subtle nuances of the production and movement of a song. I feel like she has a special talent for music videos. Obviously also growing up together gives us a great advantage in that we already understand each other very well, and we have similar artistic tastes and influences. I feel so lucky to get to work with my sister, she leads her projects and her sets with such playfulness, grace and passion.

K: We are living in a time where genres mean very little. And yet, when there’s a respect and adherence to a genre, it’s also to be celebrated. Your music is R&B in a very classical sense, where the vocal is ultimately the most important thing. I know it’s a big question, but what do you think gets lost when people talk about R&B today? What are people not paying enough attention to in regards to the craft?

S: I’m not sure if I would say people are doing something wrong in how they regard R&B, but I do feel like genre can be limiting sometimes. Sometimes I hear people who I know like songs I would consider to be R&B say oh I don’t like R&B, or something along those lines- and I am always curious what vision they have in their head because in my mind R&B is so endlessly expansive it can overlap with almost every other genre. Even for me, I am greatly inspired by jazz music, blues music, hip-hop, even classical music which I grew up studying and international music- especially in percussion textures and rhythms. I think in some ways all those worlds influence my songs even though they might fall under R&B.

Find some more shots from Radio City posted below.