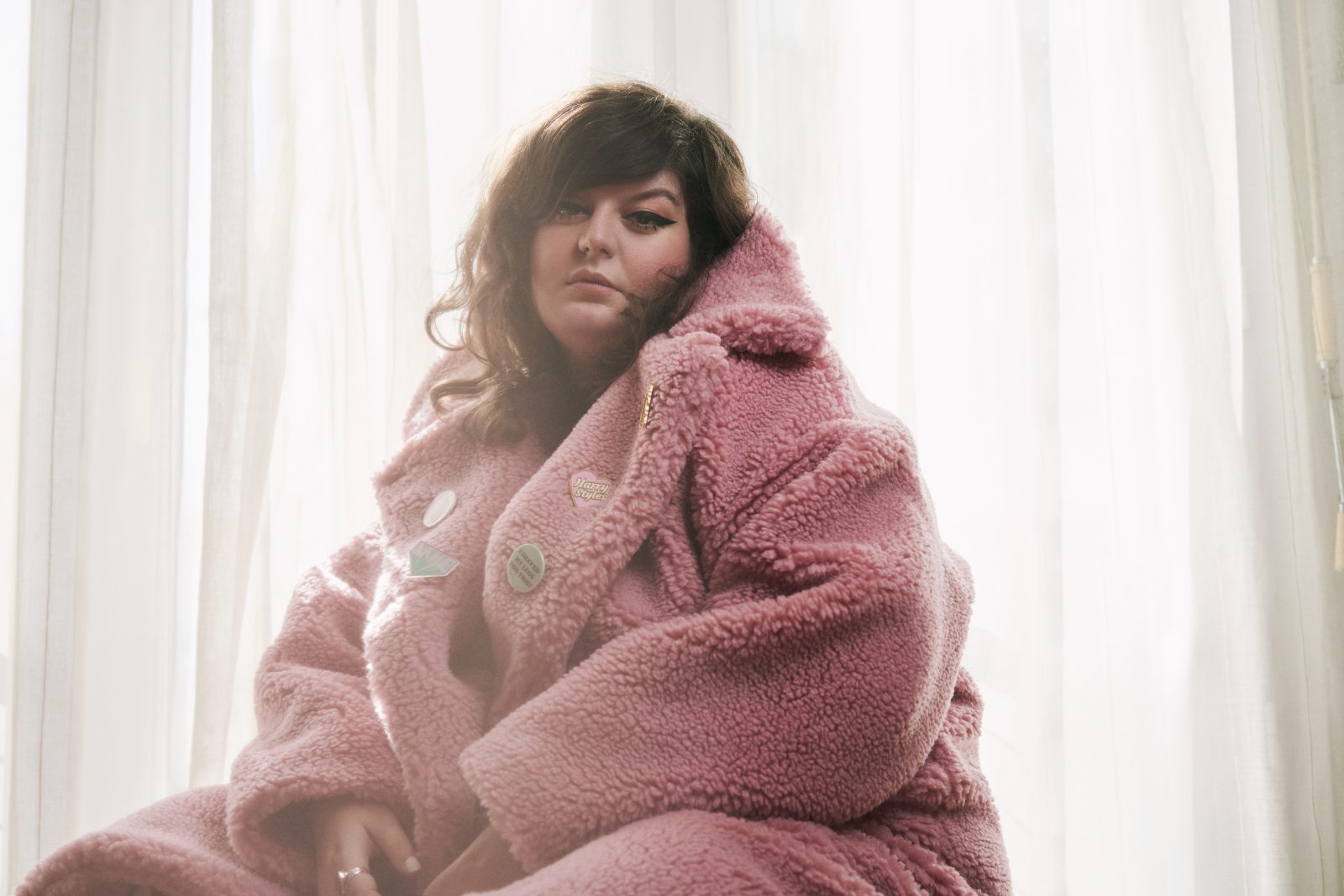 Once in a while, an artist will come along, and release a body of work and as music fans we’re reminded of how profoundly beautiful it is when a person embraces who they are. Not necessarily in a corporal sense, but more in terms of how one can convey their thoughts and feelings in a manner that cuts through all the noise. French singer-songwriter November Ultra has achieved this with her critically acclaimed debut album, bedroom walls. The title plays on how most of these songs were crafted in her bedroom-studio but also how the emotions conveyed throughout the 11 songs tie to thoughts most have in their private moments. With elements of pop, soul and r&b, November Ultra has crafted a unique world of her own and during this interview with Ken Grand-Pierre, she aims to make sense of it all.

Ken: I always love starting interviews by reflecting on the past. How would you describe the role that your grandfather played towards your passion for music?

November Ultra: I think he was a key-element in everything because he was the one who taught me my first song, a Spanish copla, I was very very young, I could barely talk and it’s one of the memories that I still have, it’s a bit blurry but I remember singing it in front of my great grandmother and her friends and I remember understanding that they felt some emotion, not knowing what it was but I knew my grandfather was proud and I liked it. After that, it just created that bond with him, Papi Ramon, a bond that was beyond words, because it was music, our love for musicals, it was him talking about albums, about artists, us sneaking out to buy more albums… He’s made music personal for me, intimate, he’s given it a heart, mine and his. But also it’s linked to my grandmother because she was the one who sang me lullabies, teaching me old Spanish lullabies and I couldn’t sleep if we were not singing lullabies, she would fall asleep and I would wake her up so we would continue singing because I liked the vibration. Music’s always been a positive soothing bubble for me. Singing and listening to it.

K: Love rests at the center of your latest album, Bedroom Walls. What thoughts immediately spring to mind when you see think of that word, love?

NU: That it’s vast, almost diluted. I’m always surprised when people tell me that my album is about love or heartbreak, I don’t know why, I catch myself having that reaction, eyes wide-opened, frowning a little bit and then you know I take the album, the lyrics and the words are like “love with open arms” or “you loved me more than any man will ever”, the whole soft&tender and le manège songs… and I wonder… Why does it surprise me so much? I mean you’re absolutely right! But maybe it’s because Love is a very universal topic, and my songs feel very personal to me, but it’s true, now that you’re saying it, that it’s at the core of the album, probably because love is a the core of everything the way a heart is the core of us as human beings.

K: The way the album starts with Over and Over and Over is so strong. The beginning is so bare with just your vocal and piano, and it should be pointed out that’s a very brave approach to take. Why did you want to start the album this way?

NU: Wow thank you! “Over & over & over” is the first song I composed after we’d split with my former band, it was me for the first time acknowledging what was going on, assessing my mental state, personal state, I was in shambles, and I love that the album opens with that, with an iPhone voice note of me singing something I had just written minutes ago while my neighbour was remodelling his flat. I don’t fight against him hammering the wall, I actually go with it, it becomes the metric. I think it’s part of the process of healing: admitting that you’re not doing so well, and embracing it. That’s mainly what I learned through the process of making this album : the power of embracing life, all of it, the good, the bad, our thoughts, our behaviours, the shiny ones that we’re proud of but also our shadows. The whole album truly is about that I think, more than anything else : surrendering and embracing, so it made sense that that would be the opener. And on a pure musical stand-point: I love that the beginning is raw because there’s a big element of memory, fantasy, ideal, thoughts in the album and I wanted different textures and layers to convey those things, so it made sense to have the album open and close on a sound that was anchored in real life and recorded raw and organically.

K: I love the instrumental climax of le manége. The album is full of sonic blemishes like this that help the songs transcend the standard singer-songwriter format. How important was it for you that the songs had texture beyond the vocals and where did that desire come from?

NU: I wanted the vocals to be at the center and at the core of what the album was, but I wanted to use it as a tool for texture and layering, for subtext, to convey a feeling where words would have been too explicit, I also really wanted to play with that reality/surreal dichotomy, building a bridge between the real world and the other one, like a ghost in-between… and the ending of “Le Manège” is exactly that – it glitches, it’s a glitch, a breaking point. I really wanted to go from that very “60s musical” voice, almost grandiose overly sweet diva singing love, to this monster straight out of Maurice Sendak’s “Where the Wild Things Are” and the “I’ll eat you up I love you so” phrase in the book and my way of achieving and expressing that was through texturing instruments and vocals all through the album.

K: Can you remember how it felt to write monomania? That’s one of those songs that feel like it was so important to get out of your head.

NU: I’d say that 90% of the times, I write melody and lyrics at the exact same time, but once in a new moon, I have lyrics that kinda pop up into my head and I write them down in a notebook or in my phone and wait… Monomania started like that, I had read Sylvia Plath’s “The Bell Jar” and after it I wrote this lyric “I cry and I panic, I lay on the floor, now that I’m down I can’t fall anymore” – it was about depression and how comforting it is to finally touch rock bottom, it’s like “okay here I am, now the only way is up, but let’s just rest here for a little while”. Again, it’s about embracing that state, that feeling.  And years later, I was in a house in Brittany with some friends to make music and my friend Felower started composing the instrumental part and suddenly I knew, I sang those lyrics over it, I knew I wanted them to repeat until the end, like a voice in your head that won’t leave you alone but that comes in various ways, sometimes it’s fragile, sometimes it’s stacked.

Then later on, I added the Spanish part and played with my vocals to create little monsters. Making music really is like doing a painting, you add layers until the thing you have in front of you looks like what’s going through your head and Monomania is the best way I could explain what goes through my head when I’m in that state.

K: As the album progresses, the major theme that sticks out are sentiments and feelings that so many can relate to but rarely utter out loud. Songs like Soft and Tender and Miel highlight this beautifully. I’m curious if that speaks to you, having an interest towards the things that are left unsaid amongst people?

NU: That’s a very interesting question… I’m French, I sing in English because I didn’t want my mom to understand what I was saying. That was 15 years ago, so I’ve been writing in English for more than 15 years now and yet it’s only recently that I’ve had the chance of performing in English-speaking cities like London or New York and suddenly I have people coming to me after the show and saying “thank you for being so vulnerable” and it truly surprised me the first time. But then it’s true, I take my songs and I’m being very honest about things, but I feel vulnerability isn’t as much about honesty as it is about how simple the delivery is and you’re taking the example of Miel and the beginning of the song is a simple statement, but a terribly hard statement. I think that was the whole point of this album, of making it in my bedroom or in my living room too, it allowed me to feel like I could say things, feel things, feel safe writing about them. You never think about the fact that those songs are going to be heard, because if you do, then you start doubting yourself or editing yourself. And what is absolutely magical about music is that once those songs are out, what felt like a problem doesn’t feel like one anymore because it’s shared with other people that feel the same and that relate, it takes away the weight of going through things alone.

K: When reading about you I read how you’ve written songs for some amazing people like Jaden Smith, Kungs, Jasmiin and one of my favourite people, Claire Laffut. What do you feel working with these people has taught you about yourself and what music means to you?

NU: Oh I’m happy you love her, I love Claire so much, she’s such an amazing, fresh and unusual artist, her mind and the way she goes about melodies and lyrics are so special and peculiar, I remember watching her work in the studio and thinking “wow she really went somewhere I wouldn’t have” and I think that’s what I love about every artist that I’ve had the chance of working with, the way that none of us work the same way, that we all have a brain of our own, a method, an idea. It’s exciting to watch, it kinda fuels you, open new windows of possibilities, recharge you even.

Below, find the video for “come into my arms” below, along with her upcoming US tour dates.