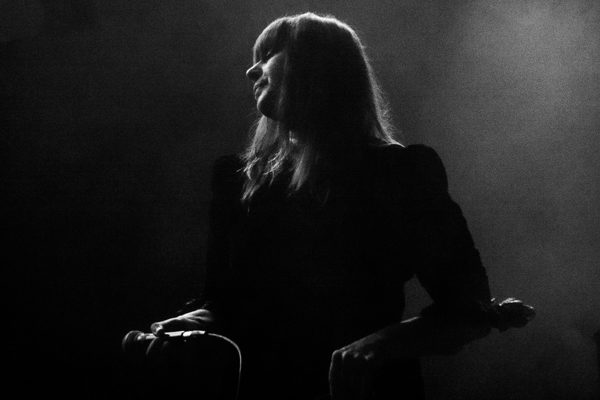 Musicians Erik Paparozzi, Adeline Jason and Alianna Kalaba took their respective places on the stage in the dimly lit Grand Ballroom of Webster Hall and began playing their instruments. Eventually, the enigmatic singer Chan Marshall, perhaps better known by her stage name Cat Power, emerged from the shadows and joined them at center stage. Clad in a long black dress, she clutched a stick of burning incense that left a skinny trail of smoke as she made her way around the stage before she settled in at the mic stand and started singing.

Marshall began with a selection from her 1998 album, Moon Pix, a song called “He Turns Down.” The version she presented with her band in 2019 took on a more mystical quality compared to the original that set the tone for the entire performance. At times, I found the mood reminiscent of that evoked by “White Rabbit” by Jefferson Airplane with its dream-like state, as I peered through the darkness seeking to catch a bit of Marshall’s face as she penetrated the shadows with her distinctive, gorgeous voice. 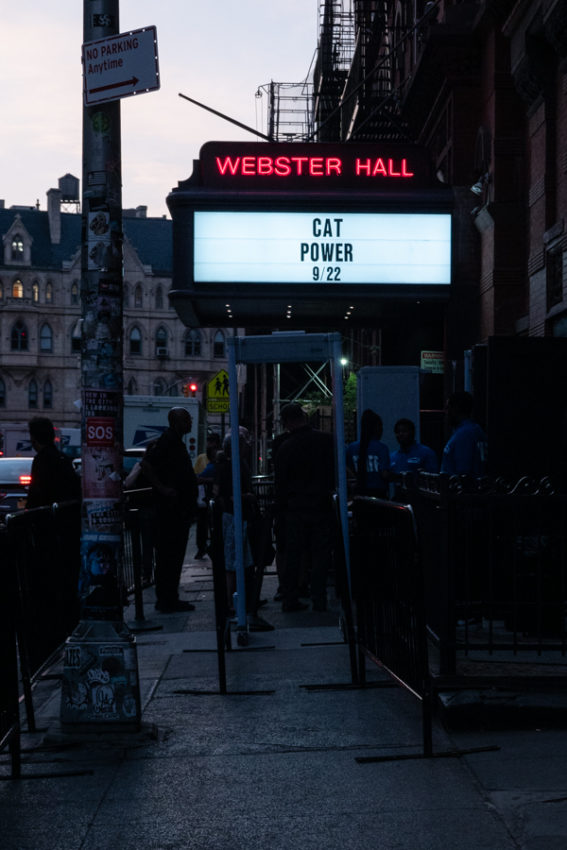 This mood persisted as she wove her way through the roughly 75-minute set. She played just a handful of tracks from her 1998 release, Wanderer, including its titular track. True to the name of the album, she didn’t dwell much on one song. She drew upon multiple albums throughout her catalog, as well as numerous snippets of covers. She and her band performed an artful medley that stitched together pieces of Nick Cave’s “Into My Arms,” her own “Dark End of the Street” and “I Don’t Blame You,” and Sinéad O’Connor’s “I Am Stretched Across Your Grave” before finally closing with “Horizon” from her latest album. I loved hearing her dip into “These Days” as sung by Nico before jumping into “Song For Bobby” from her Jukebox LP. I found the live version of “Robbin Hood” much enhanced by the steady and satisfying thud provided by Kalaba on drums. I could imagine Chan Marshall as a cowboy perched on a horse roaming through a dusty desert, alone, searching for the unknown.

For me personally, the high point came towards the end, when the band struck the opening notes to “The Greatest.” I immediately recalled the time when I caught Cat Power back in June of 2006 at Town Hall, and how thrilling I found her performance. The rawness, the nervous energy, and the realness of her presence all came together to make for a beautiful night. Flash forward to 13+ years later, and I could once again feel the goosebumps growing on my arms as her voice ascended those warbling chords.

In sharp contrast to what I saw in 2006, this current version of Cat Power is outwardly more controlled. Gone are the meandering moments of stage banter or hesitation. At Webster Hall, Marshall barely addressed the audience other than to mention a song title or artist covered, or to thank us ever so briefly (“I love you so much, I love you so much”). The band seemed to go from one song to another without pausing long if at all in between.

The entire show had minimal lighting by design, with a few monochromatic lights from the rear of the stage, illuminating the front of the audience and deeply casting the performers in silhouette. This seemed to reduce the number of cell phones typically held up in the air since it was virtually impossible to record anything worth seeing. Perhaps Marshall did not want the attention directed at her appearance, as she shifted from one side of the stage to the other, seeming to prefer lurking in the shadows in the periphery. As a result, our only option was to focus on her voice and the music itself. I do appreciate the need to be present at the moment and not be distracted by such devices, but I also felt a great disconnect due to the lack of front lighting. I love attending concerts to be able to witness artists in action, their interaction with the audience, their glances at each other.

While there were definitely some wonderful moments to this Cat Power show, I would have preferred a stronger visual element.