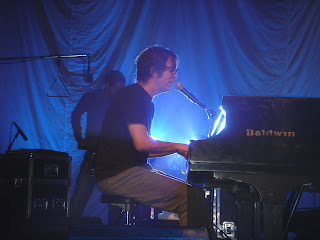 I spent my 18th birthday in NYC seeing Ben Folds live. Cannot complain with that. Waiting on line for the show I actually saw Ben’s band members Jared (Bass) and Sam (drummer) walking around calling someone (prob Ben) trying to figure out how they get in. Pretty funny. It was just the start of a wonderful evening. If anything it said a lot about Ben Folds and his band. They are laid back guys, who have a lot of fun doing what they do.

It was my second time seeing Ben Folds, my first time was their surprise tour when they stopped by Hammerstien Ballroom on November 19th. It was one of the best experiences I have had since I started going to shows. Ben Folds is a great muscian, but also a great performer. He talks to the crowd, interacts with them, tells jokes, improvs songs. He has fun with his job, afterall it is a pretty good one. He played all his hits, mostly a mix of Rockin The Suburbs and Supersunnyspeedgraphic: The LP. It was a good time full of singalongs. I don’t care what anyone says he should keep playing ‘Army’ and ‘Brick’ because they are GREAT.

Coming into the show I read reviews of his ‘Way To Normal’ tour, for his brand new album. Ben played songs from the album and fake leak for an hour straight. Fans were disappointed because the album didn’t even come out, so most of the attendees didn’t know the lyrics. People said they didn’t get the fake songs, and thought it was a waste. That the hour of all new stuff was unsuccesful, and that the only fun was the encore of old, familiar material. I can gladly say non of these problems occured last night at Terminal 5. Ben Folds was rockin the city.

Ben and company entered with one of those fake leaked tracks ‘Way To Normal’ and it was a fun way to start the show. Ben was having a lot of fun with the song, and explained the background to all who were not “nerdy enough to know about it”. He then performed three real tracks from ‘Way To Normal’ that included single ‘You Don’t Know Me’ which included voices from opening singer Missy Higgins doing Regina Spektors part. Folds included the wonderfully familiar ‘Landed’, ‘Always Someone Cooler than You’, Annie Waits’ in between the full set of new songs. It was a smart choice that was a breath of fresh air. The crowd’s energy level went up so much it was incredible. The album tracks were fantastic, Hiroshima and Dr. Yang were delivered with tons of energy and even comedy. I honestly did not see the problem with the Fake Songs. They were very funny, and sounded fine live. It is all about performing, and Ben did that for sure, even with the songs being “fake.”

Ben’s Encore woke the crowd up, to say the least. ‘Bastard’ got a great reception and was a warm up for songs to come. ‘Still Fighting’ it was beautifully done, and the crowd appreciated it with a delicate sing along. As Ben was halfway through the classic ‘Army’ he got up to direct the crowd how to sing, but he realized we already knew it. You could tell he was amazed at how much we were into his older songs. ‘Rockin The Suburbs’ got the crowd into a frenzy singing it proudly. ‘Not The Same’ was a great contrast of what Ben Folds brings. He can rock out hilariously, but then come back with sincere ballads that can bring out a beautiful sing-along. Ben came back for a short 2nd encore, defying Terminal 5’s wishes playing the hilarious ‘Hava Nagila’ and the classic ‘Philosophy’ along with Dr. Pyser.

As I left Terminal 5 I honestly felt I got more than my moneys worth. I got most of his new album, classic songs from his back catlalogue, and a great geniune performance. Ben Folds took Terminal 5 and made it a night to remember. He may be in his 40’s but he is still rocking the suburbs.

*Set-List, photos and videos that I recorded below: 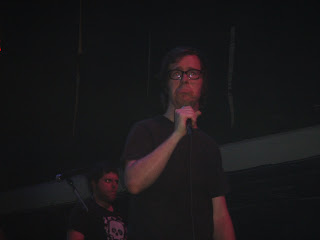 You Don’t Know Me (Feat. Missy Higgins):
Still Fighting It:

Bastard
Still Fighting It
Battle of Who Could Care Less
Army (the crowd knew what to do, as he went to stand and direct us we had already started singing, and ben smiled and was like so be it when it turned out he didn’t have to do anything)
Rockin the Suburbs
Not the Same
Kate
fake Frown song