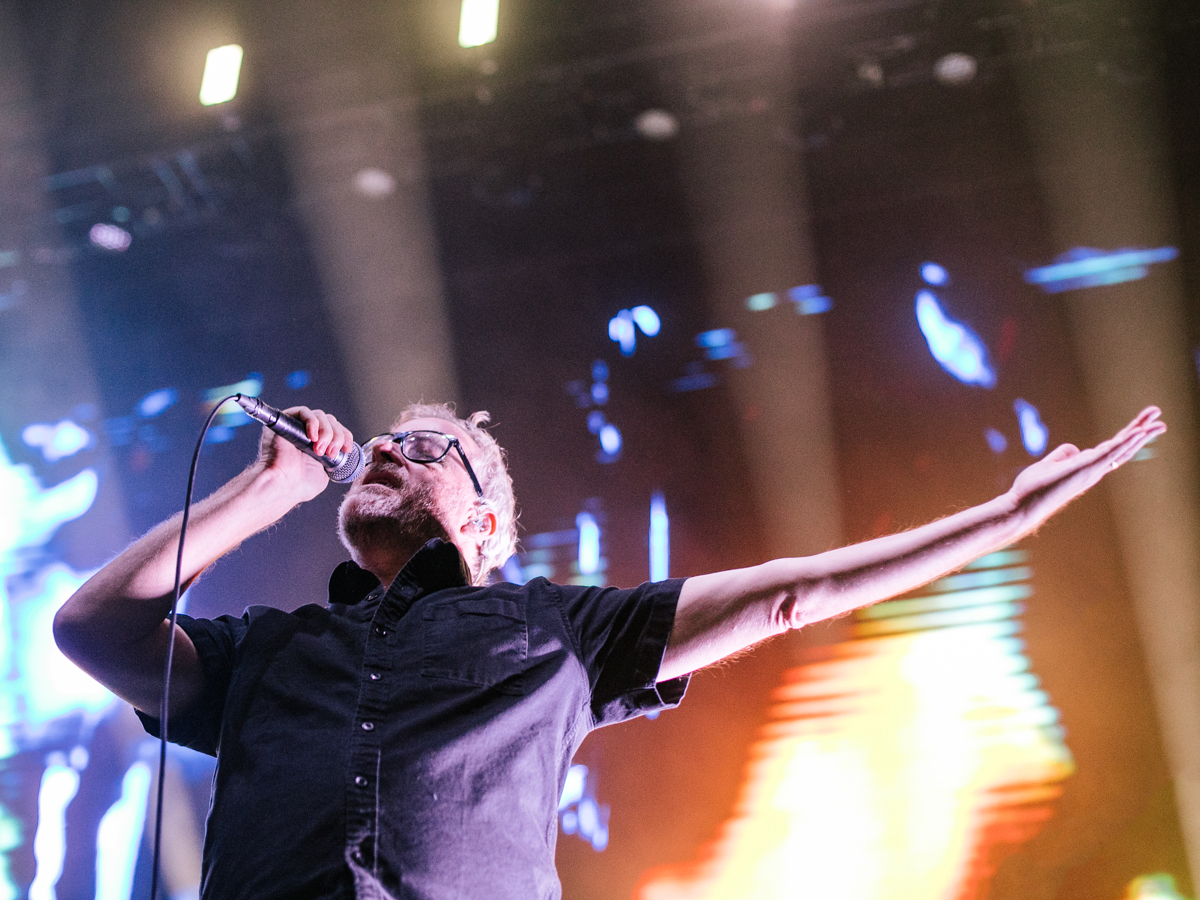 From time to time the universe works out in our favor and we’re given an absolute gift from the concert gods with the perfect pairing of venue and artist. On a cool autumn Friday night, that is exactly what we got when The National made their return to the tri-state area and finally played The Capitol Theatre.

Even with no new album to tour behind, the band has been out on the road all summer playing a handful of dates and showing no signs of slowing down. Along for the ride and kicking off the night was Australian folk/indie rock singer Indigo Sparke.

Indigo Sparke is one of those names you’ve heard time and time again and a name we’ve mentioned on the blog before. We were excited to catch her opening set and if you missed it, you missed out. Her sophomore album (produced by Aaron Dessner) drops next week and she played a handful of tracks off the upcoming album which sounded extremely polished and road-ready. At one point, Aaron Dessner even emerged from backstage to help out which turned their 3-piece band into a 4-piece and just totally rounded out their already impressive sound. Speaking of sound, I’ve seen many shows at The Capitol Theatre and Sparke’s opening set was one of the loudest I’ve heard (which wasn’t a bad thing) but truly set the tone for the rest of the night of what was to come and has us excited for her new album.

In between Sparke’s set at The National, the managing team from The Capitol took to the stage along with the mayor of Port Chester to celebrate the venue being reopened for 10 years. Among those on stage was Capitol owner Pete Shapiro who even said that in the 10 years of them being reopened, they’ve been trying to get The National to play the venue so… to say there was an anticipation and hype for this show would be an understatement.

The last time we saw the band play a headlining performance was all the way back in October 2019 at Agganis Arena when they were out on the road in support of the fantastic I Am Easy to Find (released via 4AD) which definitely saw the setlist favor that album a bit more. However, with this current tour, setlist wise it was more of a free for all since technically it’s an “off album cycle” show. Not being out on the road in support of a new album means the band is out on the road to just have fun and play music as a band again (…and also road-test new material along the way, which is a win-win for us fans).

This mentality of being happy playing music again saw the band firing on all cylinders from the second they took the stage to the second they finished. We all knew we were in for a treat when the band jumped into the absolute insane 1-2-3-4 set opener of ‘Don’t Swallow The Cap,’ ‘I Should live in Salt,’, ‘Bloodbuzz Ohio’ segueing directly into the Sleep Well Beast epic ‘The System Only Dreams in Total Darkness.’ It was an absolute monster opening to the show and they showed zero signs of slowing down the entire night.

The one other thing to note was just how loud this show was. I’ve seen them a handful of times and this by far was the loudest, most blistering, and ferocious I’ve ever heard them sound. They sounded reinvigorated while old songs sounded new, fresh, and more lively than ever before which made me feel like I was falling in love with the band all over again. While there also wasn’t too much banter from frontman Matt Berninger, you could tell the band was in good spirits and even gifted us by playing three new songs that fit perfectly amongst their already great back catalog with vintage National flourishes.

When the band returned to the stage post-encore break, they jumped into their newest song, ‘Weird Goodbyes’ followed by setlist staple ‘Mr. November.’ As mentioned by a friend, I guess we can proclaim covid is over because it marked the return of Berninger running directly into the crowd and even all the way past the back bar in the GA section of the venue. Upon his return to the stage, next up was ‘Terrible Love,’ ‘About Today’ and then closing out the night with Vanderlye Crybaby Geeks (not listed on the official setlist) which was performed acoustically as a sing-along with the entire crowd.

The National always deliver an epic set regardless of whenever or wherever we see them but this show was on a completely different level entirely. It was almost a cathartic experience being in a sold-out space with people happily singing along to sad songs by the sad dads. It’s in this “post-pandemic” world we live in where maybe we took for granted how great live music is, but either way, whenever they return to the NYC area (hopefully in support of a new album) you already know we’ll be there.