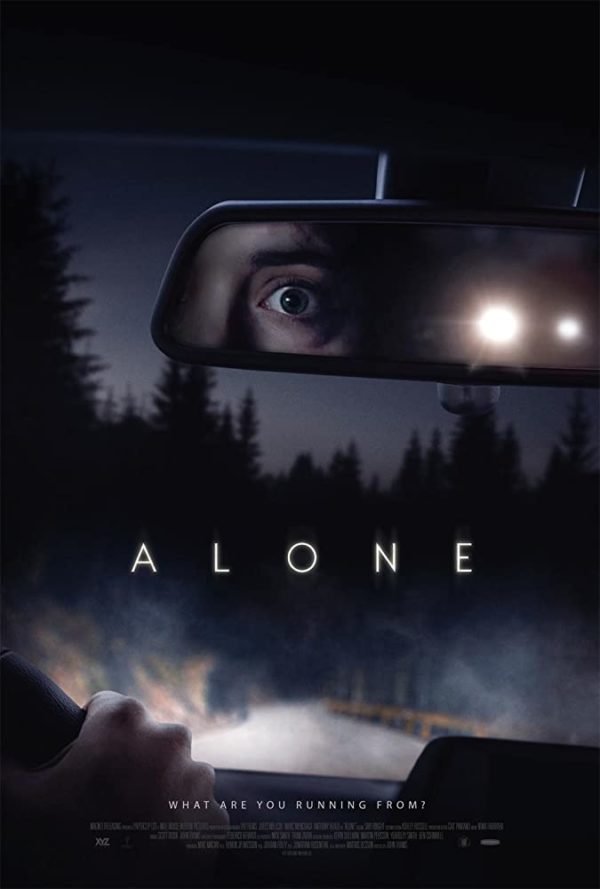 In Alone, Jessica (Jules Willcox) is most certainly alone in her running from some part of her past when we meet her by seeing her pack up her entire life into a U-Haul attached to her car and embarking on a long trip out of town. She has recently suffered the sort of devastating heartbreak involving her husband that is the sort of thing that is really impossible to truly recover from without a totally fresh start. She doesn’t even disclose her plans to her own parents until she is already on the road.

It’s out during the long lonely journey out on the highway out in the Pacific Northwest where she has a strange heart-pounding encounter with a car. This car ends up being driven by a strange man (The Outsider’s Marc Menchaca) whose path seems to keep oddly crossing with hers. Only it starts to stop seeming like an odd coincidence and Jessica starts to soon sense that there are ulterior motives to this strange mustached man who starts to seem more dangerous with every new encounter. 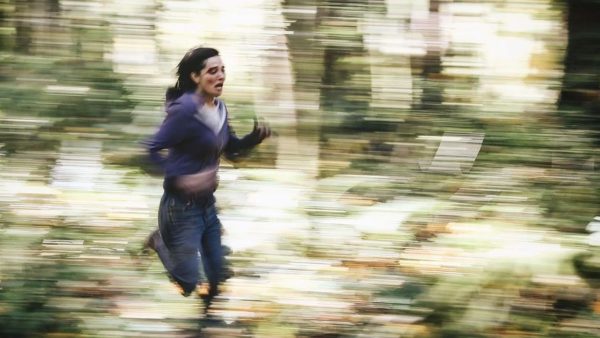 Directed by John Myams from a script by Mattias Olsson based on the 2011 film Gone that he also co-directed, it’s a simple premise that is really the battle between these two people, with their presence shared only with the nasty elements and the loneliness of the isolating road that causes Jessica as much distress as the threatening presence of this stranger.

While it may not be a totally new plotline, what Myams and Olsson do with Alone that is refreshing is the way it doesn’t toy around with the identity of this man or his plans. They don’t spend time hiding him in the shadows for a great duration of the film, only to showcase his presence during the final showdown. Instead, they completely show their hand early on rely on the fierce presence of Menchaca to do all of the heavy lifting for them.

By acknowledging that he is indeed an unhinged presence who is following Jessica clearly with some sort of sinister plan makes you even more uneasy as he is doing it in plain sight, not even afraid of getting caught. We are saved the gimmick back and forth of if she going crazy if someone is out there, and if it’s all in her head. The threat is right there trailing her, and there is not much she can do except adapt and fight back. 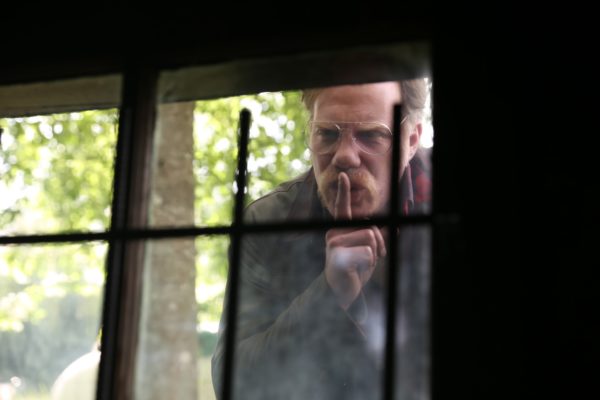 Just shy of 100 minutes, Alone is a tightly delivered b-movie that showcases the balancing act of Jessica as a woman on the brink of healing. One that is threatened by this unwelcome male presence, played to perfection by Menchaca, who proved he could do just that only a few short months ago with HBO’s The Outsider. Both of them play off of one another well here and save the film from going off course into a more campy territory that could have happened with lesser actors or a director without a steady game plan.

Alone is the perfect example of the sort of flick that knows exactly what it is and accomplishes everything it sets out for. It may not be something wholly original or fresh but in terms of a contained thriller that both accepts it’s b-movie status and doesn’t settle there, it ends up being a mighty tight thriller that would’ve been the sort of surprise hit that we were totally embracing in the 90s.

Alone screened as part of the virtual 2020 Fantasia Film Festival and will be released by Magnolia Pictures’ Magnet Releasing in theaters and on-demand on September 18th.