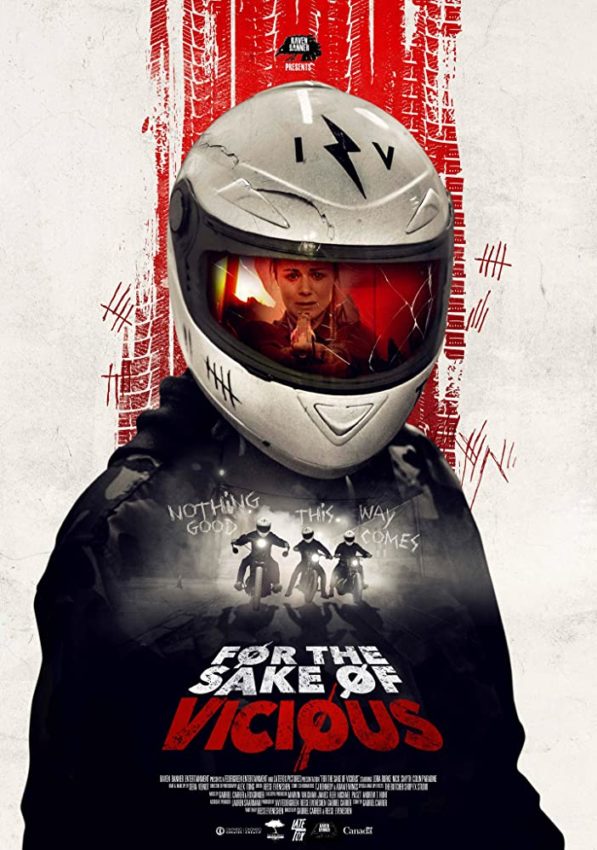 It’s Halloween night when Romina (Lora Burke) comes home exhausted from her hospital nurse shift. She just wants to enjoy the night’s festivities with her son. But she is in for a rude surprise when she finds Chris (Nick Smyth), a strange man waiting at her house. Only he isn’t there to hurt her, and it turns out he’s not really a stranger. Oh, and he’s not alone.

Chris brings along the brutally beaten body of Alan (Colin Paradine), who Chris believes to be the man behind a heinous crime committed against one of his beloved family members. He’s sure than Alan did it but Alan swears that he didn’t do it. Romina isn’t sure what to do or who to believe and unwillingly becomes stuck in the middle of this plot for revenge.

As the night progresses, more pieces of this messy and soon-to-be-bloody plot start to emerge from the directing and writing duo of Gabriel Carrer and Reese Eveneshen. They channel a ton of bloody revenge films and go all-in on the contained space in a B-movie fashion that knows exactly what it is and what it wants to achieve, having a bit of fun along the way.

After the initial premise and character set-up, Carrer and Eveneshen wipe their hands of the plot and just indulge in all of their bloody and violent tendencies. While I am very happy that we got to screen this as a virtual part of the festival, it’s a damn shame that this film didn’t get a chance to be shared with a live audience, as I can imagine that it would have played extremely well.

You don’t go into a film like this expecting anything totally new or groundbreaking, and the duo doesn’t try to upend the genre or provide shocking twists and turns. While it’s fairly straightforward and doesn’t quite hide its low budget, it does add enough stylish flare from the hypnotic score by Carrer under the working name Foxgrnder.

The movie is at its best when it goes all in and indulges in the nutty violence and chaos, embracing the “Nic Cage” of it all. It’s great to see the trio of Burke, Smyth, and Paradine slowly but surely become unhinged as the violence builds up. It’s the little deranged looks or the shared drinks of a bottle of vodka after a shared traumatic bout of violence.

For the Sake of Vicious knows exactly what it is and plays out as the sort of genre movie perfectly suited for a film festival. It’s too bad it didn’t get to play rapturously in front of a festival audience but it should still play just as well in the safety of our homes when the clock strikes midnight and beyond.

For the Sake of Vicious is screening as part of the virtual 2020 Fantasia Film Festival and doesn’t currently have US distribution.