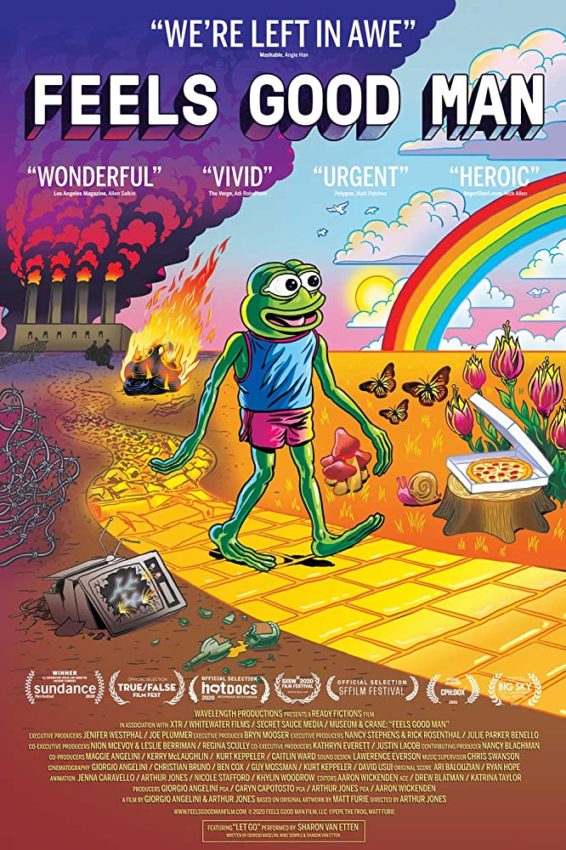 The power of the internet knows no bounds. It has come a long way since its creation, with many things both good and bad coming out of its existence. And of course, there are the grey areas. While social media is great in the way that it can connect us, it has also resulted in a lot of troubling behaviors that our society can’t seem to shake. Then there are memes. While many are truly funny and often wholesome, as usual with the internet, dark sections of the internet have also made memes into the sort of troubling pieces of propaganda that tricked so many people into thinking that America needed to be made “great again”.

These elements and so many more are at the forefront of Arthur Jones’s new documentary Feels Good Man. It takes a look at arguably the most famous meme, Pepe The Frog, looking at the effect the internet and its ability to reinvent memes has on the unsuspecting creator Matt Furie and the fallout after his creation-turned-meme somehow found itself turned into a symbol for the alt-right and may have even helped fuel the rise of Donald Trump into the White House.

Furie is the last person you would expect to be forced into this crazy situation involving any form of hate, let alone the symbolic beacon of it. He is a quiet and kind-hearted artist who has been drawing frogs ever since he was a kid and Pepe was a beloved creation that he absolutely adored. Jones and writer/producer Giorgio Angelini give us kind insight into the life and mind of Furie and you come to instantly adore him.

So when you soon learn about the descent of the character and the way that the idea of Pepe spirals out of control to the point where it seems that Pepe hardly belongs to the original artist who created him. The idea of who has ownership once an image or piece of artwork reaches a certain threshold of popularity is one thing, but when this character is used by others to brandish their own dangerous and hateful ideologies, that becomes a different and depressingly scary beast entirely. And that is exactly what happened to Pepe.

You don’t need to be an expert on the character or the world of memes and 4chan to be pulled into this documentary. Jones sets the table in an easy to follow and understand manner, one that takes a look into the depths of these anonymous communities that found a connection with this frog and used it to voice how they were struggling with life, mostly jobless and still living at home with little social interaction, apart from internet communities. But when “normies” started to use the frog, they took matters into their own hands and turned him into something that would spiral so out of control that it absurdly played an effect on the 2016 election and political rise of Donald Trump.

Furie sat by not sure how to handle or process watching his creation spiral into something he couldn’t even recognize, to the point where it felt like it wasn’t even his anymore. This is the core of the documentary, about taking ownership back after others try to make it reflect their own troubling beliefs and values, as well as the uphill battle that will ultimately take you to the depths of hell along with it.

The absurdity of the situation is frustrating but you can’t help and laugh at the insanity of it all. But it becomes sobering and quite troubling to see Furie cope with this and try to reconcile any semblance of hope in this character that has suddenly become irredeemable, to no fault of his own.

To say much more would spoil at the events that follow and the astute analysis delivered by Jones and Angelini. It never panders to the audiences or acts preachy, but observes and provides an insight into how such a seemingly harmless creation spiraled into so much more.

Although Pepe was put into the darkness there is some light at the tunnel for both him and Furie, the sort of hope that we hope to carry on into November to help take back ownership of our country.

Feels Good Man is screening virtually as part of the 2020 Fantasia Film Festival and will be released digitally on September 4th.