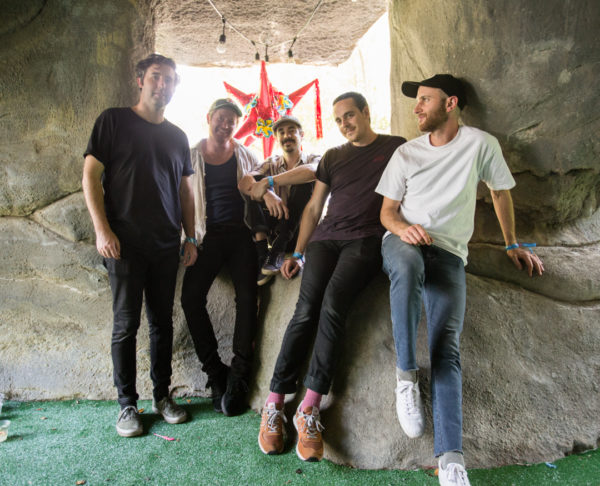 Earlier this month Rolling Blackouts Coastal Fever returned with their sophomore album Sideways to New Italy (via Sub Pop Records). It was one of our most anticipated records of 2020 and it’s safe to say that it found a way to exceed our unfairly high expectations and is one of the years very best.

A few weeks ago I had the honor and privilege of getting the time to ask singer/guitarist Tom Russo some questions about how he’s handling quarantine, what is was like releasing a new record during such a crazy time, if they experienced any pressure about matching a critically lauded debut album and their songwriting process at large.

You can find our chat in full below and please note that it has been lightly edited and condensed for clarity.

Will: Hey Tom, thanks for taking the time to do this! Where are you currently and how have you guys been during quarantine?

Tom: Hi Will, been pretty good considering! I’m at home in Melbourne, Australia. Just coming out of lockdown over here, personally I’ve been walking a lot and playing around with drum machines.

W: With all touring on hold, did you guys ever consider postponing the release of the new album? Was that ever a discussion?

T: We talked about it for about a minute, but it didn’t make sense to us. The songs are a snapshot of a particular moment in time, and to artificially delay the release didn’t seem right. I think it may have actually helped us in the end, with so many artists delaying their releases until later in the year.

W: Even now with all the tough race relations here in America and spreading across the globe, does it feel weird releasing a new album during such a crazy time?

T: It definitely feels weird pushing out a new music release when there are so many more important things happening. We couldn’t really delay it as all the wheels were in motion, it all exploded about a week out from our release date. We’ve been trying to figure out how we can use our own small platform to make whatever difference we can, rather than promote this album in a vacuum as if this isn’t all happening. It seems like despite all the pain we are all in a defining moment in history with some long-overdue change being forced, hopefully.

W: You guys have always toured hard behind your music. I imagine it must be strange releasing the album without the ability to play the songs live?

T: While I would say I’m over the initial disappointment at having all this year’s plans canceled because we realized very quickly everyone is in the same boat… damn it would be fun to play these new songs live! I am missing the ritual of live music, not just playing but also going to shows. Hoping things are looking better next year, but the surreal thing is no one knows what’s going to happen at all. 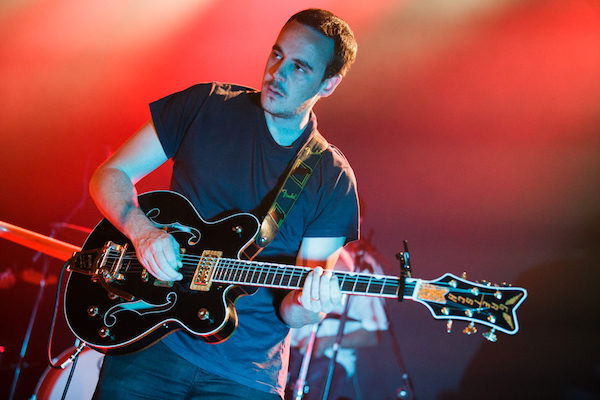 W: You guys have this ability to make rock and roll just feel as infectious and hooky as the best pop music. How do you guys pull it off and make it seem so natural?

T: No real formula, we just follow our intuitions, and having multiple songwriters in the band means that certain hooks get seized on and built upon by a few different people, naturally we pick out the parts that hit us hardest and make them stronger.

T: We had internal pressure on ourselves to make it good as we are all control freaks to a degree, but our labels or managers, etc didn’t heap any negative pressure on us. We tried to experiment with structure, writing very collectively, and developing rhythmically. In the end, some of those experiments were noble failures, and we polished some weird half songs back into more conventional pop song structures that made sense. I think this one is my personal favourite, so to me, we succeeded.

W: Take us into your writing and recording process – were you able to write while on the road or was the session primarily post-tour?

T: I find it really hard to write on tour, it’s a different mindset and I like using moments of downtime to take a mental break from thinking about music. We wrote bits and pieces on tour through jams during soundcheck, and I developed some ideas using cheesy synth and drum presents on Garageband while in the tour van. “Falling Thunder” started out this way, it was written with computer synths and transposed to guitars much later. The majority of writing we did post-tour, the old school way, the five of us in our practice room jamming on an idea for 15 minutes at a time until something exciting happened. It was a real collective effort, and a hard slog at times.

W: You guys are able to really capture the sound of being present in a place/location so well. Would you say this album captures the sort of contrast between your hometown and the lifestyle of being a touring band traveling the globe?

T: Speaking for myself, while touring the world, I kept reflecting back on ideas of home, and how people build their identities and concept of home. It’s something about being a constant fly on the wall in other people’s lives and backyards, again if I may quote myself in “Falling Thunder,” being a ‘ghost at the service station’. It’s a great privilege and also can get quite disorienting. We tried to ground our sense of selves using these songs, it’s a bit of a love letter to people and places that shaped us.

W: The title of the new album ‘Sideways To New Italy’ captures a vivid picture of so many things in the mind. What is its significance to you guys and how does it connect to your Australian roots?

T: New Italy is a little village in the hinterland of the Northern Rivers region of Australia, Italian immigrants came there and made a replica of their home city, marble statues and all. It’s not really about the place ‘New Italy’, that is more of a little symbol of people reaching for some utopian sense of home a long way away from it, and the complications in reaching for utopia.

W: “Cars In Space” was such a brilliant lead single choice as it feels like a passing of the torch from ‘Hope Downs’ to the new album. Was it always the clear cut first single?

T: No actually, we thought it might be too long, weird and bulky to be a single. It was strongly pushed by our management and labels, and in retrospect, they were right and it was the perfect way to introduce the album. 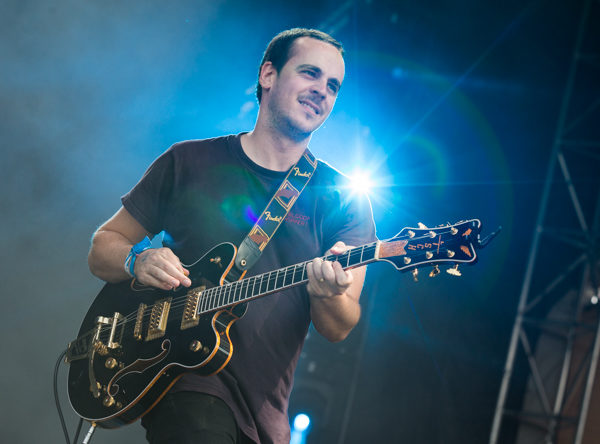 W: The video for “Cars In Space” is such a simple but well-executed concept, one that feels old fashioned but in a modern sense. Did any of you guys have any fears about dancing on camera?

T: We thought it would be funny just because it’s against expectations of something we would do, none of us are naturals, it’s fair to say. It all came together very last minute, we recruited a friend of a friend who was a choreographer, and did a sweaty practice session the night before the clip. I think we were all concentrating so hard on not messing up the steps that there was no time to be self-conscious.

W: I hear from so many people that “rock is dead.” Yet you guys are so clearly proving that isn’t true. What does it mean to be a rock band in 2020 and what does success mean to you as a musician in this day and age?

T: I think that’s a pretty ivory-tower conversation that I don’t have a whole lot of interest in. We just play what excites us, and I know a lot of other loosely ‘rock’ bands that make music that is exciting to me right now. We all love a wide range of music and are by no means rock purists. I think rock has given up its mantle as the most commercially popular genre to hip-hop and pop, and that’s completely fine by me.

I’m a fan of a lot of that music, and things have always ebbed and flowed in music. I don’t think there’s any danger of rock dying out as long as the fact remains that it’s really fun to play loud guitars and drums in a room with your friends. Success for me is about being able to balance making music I’m proud of, and an outside life. Anything beyond that seems to be setting yourself up for failure. As far as making money from music, that’s more uncertain than ever, and should never be the primary marker for success in my opinion. 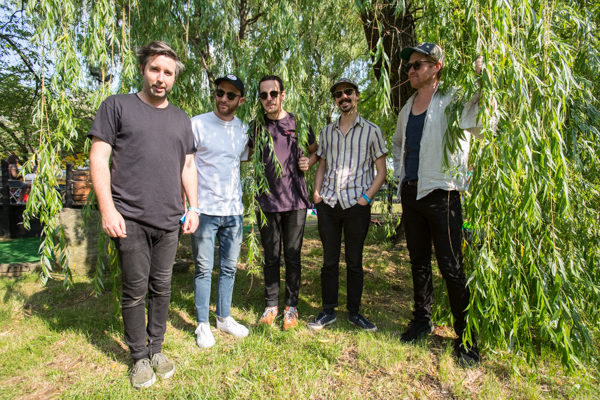 W: I remember seeing you guys open for Tennis at Bowery Ballroom in 2017 and winning the crowd over instantly. NYC is a tough place to win over but you guys have done so pretty much right away. What kind of relationship do you have with New York City?

T: Like probably everyone in the world, I love NYC. I’ve always had a great time there, when I was younger I spent a couple of months there, it is kind of a playground for a youngun who likes music and adventure. Bandwise, we have always been well received in NYC. We’ve been influenced by a lot of classic New York music and maybe it’s that reflecting back. The Bowery Ballroom in particular is a special venue. It was a proud moment when we came back the next year and sold it out in our own right. I don’t think people are rude either, like the stereotype suggests – In my experience it’s a lot like Australia, where strangers are happy to make conversation with you on the street, there’s a real spirit there that feels familiar.

W: Australia has handled Coronavirus so much better than us here in the states. Do you think you will be able to play some shows at home later this year if things continue on this path?

T: We really hope so. We’ve been fortunate to have a head start by watching other places grapple with it before it got here properly, and recognize the seriousness of the situation. It’s still unclear if big shows will be possible, but we have a bit of a dream to do some small, isolated rural shows, and get to spend time in a lot of beautiful places at the same time.

W: Finally, what stuff have you been binging / enjoying (music, movies, tv) during quarantine?

T: Like everyone, I finished The Last Dance, an interesting portrait of the antisocial drive that fuels greatness. I have mainly been listening to ambient music, soothing for the soul in these wild times. Especially Japanese ambient artists like Hiroshi Yoshimura, Takashi Kokubo, Kyoto Connection.

Sideways to New Italy is out now and can be purchased on Bandcamp (consider doing so this Friday, as Bandcamp will be donating their fees to the NAACP)