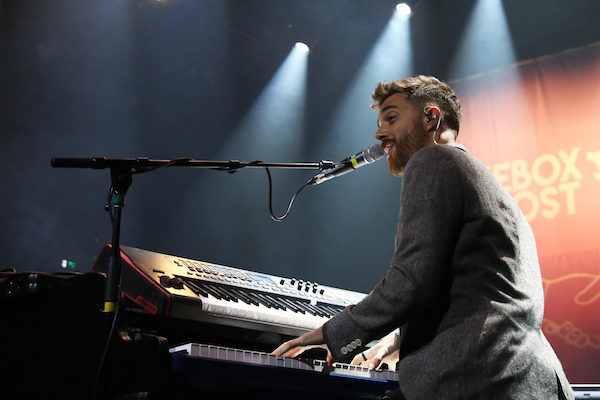 Interview and Photo by Killian Young

Jukebox the Ghost are getting in the Halloween spirit with their HalloQueen concerts on a six-city mini-tour, the most they’ve ever done in a year. The indie-pop trio are splitting these October shows into a set of original songs followed by another set of covers while they’re dressed as Freddie Mercury (played by vocalist/keyboardist Ben Thornewill), Brian May (played by vocalist/guitarist Tommy Siegel) and Roger Taylor (played by drummer Jesse Kristin). They even recorded some studio versions of their Queen covers (“Under Pressure”, “Somebody to Love” and “Don’t Stop Me Now”) to hype up their fans for the gigs. Ahead of Jukebox the Ghost’s headlining show at Webster Hall, I caught up with Thornewill about all things HalloQueen,

Some of the questions have been edited for brevity and clarity.

Q: To start off, can you tell me about the first time you listened to Queen?

A: It’s so funny. I think I probably had a similar [experience] everyone else did of our generation. It’s just a part of growing up, it’s just the music that you know. And “Bohemian Rhapsody” is a song from Wayne’s World. All these other songs are at sporting events. So I actually don’t remember the first time I encountered Queen.

I remember in high school stumbling upon the Greatest Hits and thinking, “Oh my god, how are there this many incredible songs by this band?” And that’s been the experience we’ve had doing these shows. We keep adding songs and changing them out. No matter what we play, it’s hit after hit after hit.

Q: How have the couple early HalloQueen shows been?

A: Fantastic, awesome. The first one of each year is a little nerve-wracking because I’m shaving the beard into the mustache for the first time, and we’re playing new songs. We haven’t done it for a year. So that’s always a little stressful, but we played in Austin on Friday and Seattle on Saturday – and they couldn’t have gone better. Smashing shows, totally packed, people were in costume and freaking out, and we had an amazing time.

Q: I heard there are three new cover songs in the set?

A: Yeah, three new songs. We may have switched one of them out for an old favorite because it didn’t get the response we wanted. But there’s still new stuff happening in the set for sure. We’re still being cryptic about it, I guess.

Q: The costume contest is a big part of these shows. Can you think of any especially memorable costumes?

A: It’s funny, I have two answers to this. One is, I’ve never gotten to watch the costume contest. Because while they’re parading across the stage and voting and everyone’s screaming and clapping, I’m trying to change into my Freddie Mercury outfit and get ready to be Freddie. So I never actually get to watch it, which is such a bummer.

So I usually go back and look through the socials and find out who the winners were. There was one some years ago, and a girl just dressed up as fish. Not like a Nemo, not like anything – just a fish. For some reason, everyone just latched ahold of it. It was not the best costume. It was not the most creative costume. It was the dumbest costume onstage, and it was 700 people chanting, “Fish! Fish! Fish! Fish!” So I remember hearing that and seeing the picture: “Oh, that’s a girl in a fish outfit. Cool.”

Q: I remember a few years ago in Brooklyn, the winner was a guy dressed up as “Juicebox” the Ghost.

A: There’s usually a couple Jukebox-related puns, and then usually somebody dresses up as me or Jesse. That seems fairly common too, in a really nice way.

Q: Can you tell me about the inspiration to do HalloQueen for the first time?

A: Jesse, the drummer, came up with the name: “Guys, I’ve got a name for a show. It’s called HalloQueen. We do a full set of Queen for Halloween.” We had learned like four or five Queen tunes at that point just ‘cause we wanted to and for playing the shows. He was like, “If we learn three more songs, we’ve got a full set.” And then it was born, and it’s taken on a life of its own.

Q: What was the first Queen song that you learned how to play?

A: “Bohemian Rhapsody”! We did “Bohemian Rhapsody” in college, even before we’d come up with the band name Jukebox the Ghost. I’d completely forgot about that because it was so audacious. We had no right to be doing that. We sounded nothing like how we do it now. We learned that back when we were 19, 20.

Q: Do you have any favorites of the Queen covers to perform live?

A: “Bohemian [Rhapsody]” is always a trip. I play bass on “Crazy Little Thing Called Love” and “[Another One] Bites the Dust.” So that’s really fun for me to play the bass. I play drums on “Fat Bottomed Girls”. Honestly, every song is a blast. I know that sounds like a cop-out, but I’m either playing piano, up dancing around, playing bass or playing drums and all the while dressed up like Freddie Mercury – and it’s so much fun.

Q: Can you tell me how Queen has inspired Jukebox the Ghost, either in original music or performance?

A: The Queen influence on our music actually happened in a roundabout way. People for so many years would say, “You guys sound like Queen.” When we were actively trying not to sound like Queen. Then maybe four or five years ago, we’re doing these Queen tunes, and everybody keeps saying it. Obviously we’re inviting the comparison. And we just thought, “Screw it. Let’s try to sound like Queen a little bit.” So you heard that a lot on our last record, like with the bridge of “Everybody’s Lonely” or “Jumpstarted” or some of these songs that are a little more adventurous and a little more out there.

For me as a performer, being able to run around and sing and have the microphone like that. I’ve integrated that into our set a little more, some more freedom to roam around.

Q: Are there any Queen deep cuts that you could envision covering?

A: We learned “Death on Two Legs” for this tour. Do you know that tune? That’s a deep cut that’s awesome. It’s super metal. It’s really fun. We only play 1:40, 2:00 of it. And that was the one we played in Austin, and it just didn’t get a response. So we’ve found that we can sneak ’em in. If it’s something that people won’t know, we’ll do a sample of it, just to give ’em a taste. For the most part, they’re not coming to hear the Queen b-sides, the deep cuts. They wanna hear “Bohemian [Rhapsody]”. We wanna play “Bohemian [Rhapsody]”. And we’re gonna make it a party.

Q: You have a band cell phone number that fans can text. Have you gotten any good HalloQueen-related questions?

A: It’s so funny, most of that is people being like, “Is this real? You’re screwing with me, right?” There hasn’t been a ton of richness of questions yet. So hopefully we’ll get into some more deep conversations. But it’s also a little overwhelming because at any given time there’s 2,000 text messages awaiting response.

Q: Have you seen the Queen + Adam Lambert tour?

A: No, I haven’t. And I don’t know if I want to. I want to for the sake of doing it, but I don’t know what my emotions would be about that. I have very mixed feelings about the Queen movie itself, so I want to maintain some of the shine and glamor of the unknown of the band.

Q: Tell me about your thoughts on the movie.

A: I hated it [laughs]. Hated it, hated it! It’s funny, Jesse, our drummer (who’s the biggest Queen fan of the band), loved it. For him, he was looking at it like, “Are they gonna check all the boxes of the Queen history?” He’s checking the outfits are in chronological order and the albums are in the right order and who wrote “I’m in Love with My Car”. He loved all that nerdy stuff. For me, I wanted to see all the messiness of Freddie Mercury and the reality of the band. And I just didn’t feel like it was there for me.

Q: If you could collaborate with any of the living members of Queen live, who would it be?

A: It would have to be Brian May, right? Just to get those guitar licks. And his guitar writing is out of control. And I would just love to see him and Tommy nerd out and play together on guitar. ’Cause Tommy’s playing those licks in his own way, and I think they could do something real cool together.

Q: Do you have a favorite memory from a past HalloQueen show?

A: My strongest memories are of the first HalloQueens when I didn’t even know how in character I was gonna be, what I was gonna do, if I was gonna talk in an accent. Just getting up there and trying to embody the bravado of Freddie. And I attempted it and loved it. It felt for the first time like I was doing theater, like it wasn’t me on stage – it was me playing a character. And I really loved that.

Jukebox the Ghost will play the NYC edition of their HalloQueen concert at Webster Hall on 10/26, with doors opening at 6:30 p.m. Tickets are sold out from the venue but are still available on Stubhub.