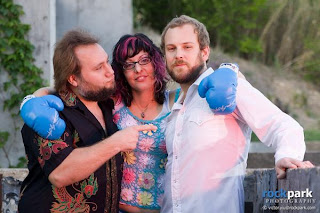 Thanks to this blog and the power of e-mail, I was able to discover The Boxing Lesson. I reviewed their latest album a few days ago, and their manager Ryan was kind enough to set up an interview with the band. It was my first time conducting an interview, so congrats to them for being a WAWSTSF first. (how exciting right?) A big thanks goes out to them for taking the time to answer a few of my questions. Check it out below folks!! :

WE ALL WANT SOMEONE TO SHOUT FOR INTERVIEW:
The Boxing Lesson

WAWSTSF : How did The Boxing Lesson Start? What motivated you guys to start the band?

PAUL: The Boxing Lesson originally formed in Los Angeles around the turn of the century. We did a couple EPs there as a five piece band which are close to being out of print. Right now, we are in Austin as a three-piece and have two releases down here, â€œSongs in the Key of Câ€ and â€œWild Streaks & Windy Days.â€ Our motivation came from a shared deep-rooted need to play this music together which initially sparked from a mutual interest in exploring synthesizer sounds, old records and psychedelic drugs.

JAYLINN: My Boxing Lesson started with this guy named Bruno giving me instructions on how not to get hit; which is the most important lesson of all. Bruno motivated me to join a band because actual boxing really hurts.

WAWSTSF : Where did the band name come from?

WAWSTSF : What is your opinion on music/mp3 blogs? Do you feel that they are helping artists, or that the bloggers just use it to gain popularity and make money?
PAUL: I feel that blogs are helping artists connect with more people. Itâ€™s a great form of promotion and exposes the music to a particular blogâ€™s community who may not have heard about the band otherwise. Of course, some blogs are just utter crap but others are intelligently written, hold a particular point of view and stay consistent to it. Those are the ones that have become the taste makers in this new media landscape. Everyone wants to be popular and make money. You canâ€™t hold that against anyone in this day and age.
WAWSTSF : What are your plans for the future?

JAYILNN: Getting Pluto re-instated as a planet.
PAUL: Well, our original drummer Jake Mitchell has been in federal prison since September and we are awaiting his appeal in the early months of 2009. So his future is still kind of up in the air. Before he went to jail, we hit the studio with a handful of new songs and laid his drum tracks down with our producer, Tim Gerron. This could turn into a 2009 EP or the beginnings of a new full length. We havenâ€™t figured it out yet. In the meantime, his legal troubles are not stopping this band by any means. We are getting ready to do some more touring with our close friend Kevin Sparks behind the kit. We are heading out west for a quick two week run and The Boxing Lesson plans to hit the southeast and southwest again in January and February leading up to SXSW here in Austin. We just signed a licensing contract with Big Sounds International which we are all very excited about as well. The Boxing Lesson is looking forward to the new year and hopes to do lots of national touring as well as head overseas and hit Europe for the first time as a band. Thatâ€™s always been a big dream for all of us and we are feeling pretty lucky these days.

WAWSTSF : What is on the ipod?
1. Pink Floyd – Animals