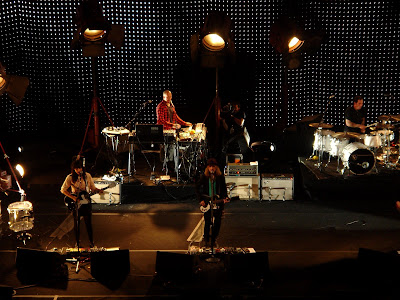 So the night had finally arrived. Two big acts. One of the acts just hit in big recently, and their popularity is growing with each passing day. The other is a seasoned vet who has been making music for well over a decade. Say hello to MGMT and Beck! At the United Palace Theater on October 9th these acts came together (as they did on October 8th, and will October 10th). Boy is the venue a beauty. I haven’t been there since I saw Bloc Party last March. It really is a pretty place to see a gig, just being there is an experience.

MGMT came on right away kicking off with the epic and very long ‘Metanoia’. The song sounded quite psychadelic live but it defenitly wore out its welcome after a while. They then hit into many of the familar tracks from their only album ‘Oracular Spectacular’. ‘Electric Feel’ and ‘Time To Pretend’ got big receptions and were quite enjoyable. They ran through ‘Weekend Wars’, ‘The Youth’, ‘Pieces Of What’ pretty well. Their performances live are defenitly more progresive rock and jammy than what you get on the record. Stripped down, I felt their performances were great. Their drummer’s playing was a lot more noticeable live. My only complaint was they didn’t play my favortie song ‘Kids.’ I wasn’t alone either, I heard numerous calls for it. I could have done without the oh too long ‘Metanoia’, if that meant ‘Kids’ got in there. What can you do?

Beck came on right on time, which is a rarity these days for an artist to come on stage on time. He played ‘Loser’ right away pretty much giving a statement that it isn’t one of his favorites to play anymore. He then went into about 5 songs from his recent albums that included ‘Nausea’, ‘Girl’ and the great ‘Timebomb’. He then went further back to his ‘Odelay’ and ‘Midnite Vultures’ days with the great ‘Minus’, ‘Mixed Bizness’ and ‘Nicotine & Gravy’ (which may be my favorite Beck song right now). Beck quickly got through the songs, one after another. He kept to himself not interacting with the crowd beside a few hellos and how you doing? I didn’t mind this at all, you could tell Beck just wanted to keep chugging away. Beck rocked the fan favorite ‘Devil’s Haircut’ and the crowd rocked it right back. After the enjoyable ‘I Think I’m In Love’ Beck paved the way for tracks from his new album ‘Modern Guilt’. I am a big fan of the album, I think it’s one of the steadiest albums this year. Songs like ‘Modern Guilt’, ‘Chemtrails’, and ‘Walls’ really worked well live with some more soul. I really like the atmosphere that the Modern Guilt songs provide.

After a fun rendition of ‘Where It’s At’, Beck left for a few minutes only to reutrn right away to get through his encore. It featured the standout ‘Gamma Ray’, a new song, and the awesome
‘E-Pro’. It may not be Beck’s best song, but if you were a newcomer to Beck last night, you may have thought it was after seeing the crowd reaction. You could hear the nah nah’s as you were leaving the beautiful Palace.

I didn’t need Beck to intereact with me to enjoy the show. Beck did his job well, and if he wants to just play right through the show, so be it. The songs were great, and I had a good time. That is what matters. MGMT provided a good start to the night, and Beck just being Beck made it even better. 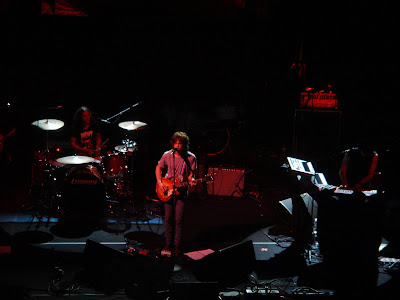 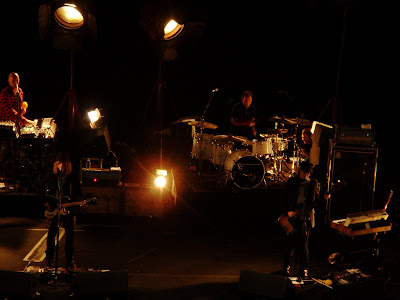