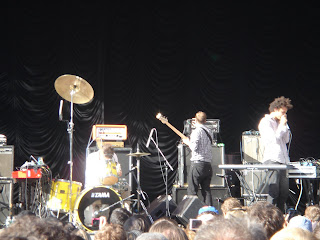 Battles used to be a band that once made no sense to me. They were practically on every best of 2007 list, yet I didn’t comprehend why.The vocals on their hit Atlas didn’t quite do it for me at fist and as a result I ignored them throughout 2007. Ironically it is the same song that made me into a fan of the band! The music that battles plays probably is an acquired taste, but once you get into them oh man. They really made my glad that I gave Atlas a second chance. I have had 3 songs of theirs stuck in my head since, taking turns. You may scratch your head listening to them the first time, but if you go back to them you will be rewarded!

They played a free show at Central Park today so I figured it would be totally worth the trip down. The two opening acts were Gang Gang Dance, and Black Dice. Gang Gang Dance sounded like portishead to me, just a bit on the whiny side. Music was alright but the vocals didn’t do it for me. Black Dice was basically 3 guys playing a mix of noise/electronic/experimental. They basically played the same song for an hour without a break. I did enjoy the first 15 minutes or so of their act but it grew tiresome and lost my attention after that. Not bad music but I guess it wasn’t my type.

Battles made up for the “meh” opening acts for sure! These dudes came on with a cool set, and just looked like cool guys. They came on strong with a strong set filled with songs from their debut album “Mirrored.” The band played long songs that pushed 8-10 minutes sometimes. It wouldn’t have worked any other way. Battles thrives on the recordings of notes looped over each other creating layers of sound that just fills up all the space in your head. They play their instruments so well you cannot help but focus on them. The rhythm section is pretty amazing to sum it up, their drummer John Stanier left me very impressed. It really was quite an experience, this is music that thrives on the outdoors live! The highlight of the day easily as expected was everybody’s favorite song, “Atlas.” This song just rules live, oh man. They play it with so much passion that Tyondai Braxton’s robot vocals speak with a better voice than a humans ever could. It was just raw power, a juggernaut of a song live or not.

I expected a fun show but what I got was above and beyond. This was real rock and roll. I wanted to listen to them for hours more. Forget that robot rock crap. This is what music should sound like. Defiently check Battles out if they stop by near you. If you ignored them out of confusion like I did, give them another shot. Somethings sound better that way. Video of Atlas that I took below!!!